Doctor Who: "Flesh and Stone" 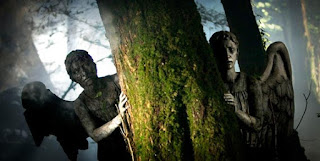 The Doctor (Matt Smith) and his companions are on the run from the Weeping Angels through a forest inside a spaceship - but while the Angels stalk them, something even more dangerous is developing in the heart of the ship.

Steven Moffat originally created the Weeping Angels for a two-part story for Season 3, "Silence in the Library" and "The Forest of the Dead". When other writing commitments restricted his availability his two-episode slot was shifted to Helen Raynor for "Daleks in Manhattan" and "Evolution of the Daleks". A short while later he found enough time to contribute a single episode, and so co-opted the Angels into their own story "Blink". The following year, with more time, Moffat finally wrote "Silence in the Library"and replaced the Angels with a new monster called the Vashta Nerada. I'm explaining all this because in many respects "The Time of Angels" and "Flesh and Stone" feel pretty much like what I imagine a Weeping Angels version of "Silence in the Library" and "The Forest of the Dead" would have been like. This episode even has a forest in it.

It's a great, very Doctor Who-esque concept to put a dense forest into the middle of a starship, drawing in light from passing stars and providing the ship with oxygen. Other science fiction texts have tried something similar of course, but here they've dropped in an actual forest. It's another fairy tale touch in a season that's rapidly filling with similar fairy tale moments.

Amy (Karen Gillan) continues to have a terrifying experience. Last episode she looked into the eyes of an Angel - because if she didn't it would sneak up and murder her. Now she has a tiny copy of an Angel growing inside her mind. To stop it from growing and killing her she must keep her eyes shut. She's also stuck in a forest surrounded by Angels, who can only be prevented from killing her if she opens her eyes - an act that will kill her. The Doctor's solution - for Amy to pretend she can see while keeping her eyes shut - feels like a bit of a cheat, but in the context of the scenes and with such excellently tense direction, it's a cheat I'm willing to accept.

There's some very clever plotting going on in this episode that's easy to ignore. The cliffhanger from "The Time of Angels" is resolved by the Doctor taking advantage of the Byzantium's artificial gravity. It initially feels like a clever bit of sci-fi nonsense, but of course it also introduces the idea that the ship's internal gravity is failing. When that failing gravity helps solve the episode's climax, it doesn't feel like a cheat because it's already been subtly foreshadowed.

That said, something very odd does happen in the episode's second half; the climax of a two-part serial is shattered to pieces by the arrival of a season-long story arc. "The Eleventh Hour" introduced the idea of cracks appearing all through time and space, and the phrase that "silence must fall". We saw the crack again in "The Beast Below" and "Victory of the Daleks", and the latter episode had the Doctor surmising that pieces of history - like the Dalek crisis of Season 4 - were being eaten up and removed from existence by the cracks. Now another crack appears, bigger and hungrier than ever. It doesn't just look ominous this time - it chews up and eliminates the entire climax of the story. The Weeping Angels aren't defeated so much as arbitrarily removed. The same goes for almost the entire squadron of clerics aiding the Doctor, Amy and River.

You could argue it's a deus ex machina ending; that's a theatrical term, meaning "god from the machine" and signifying a sudden and arbitrary arrival of a conclusion without warning. It used to happen a lot in classical Greek theatre where things would reach a crisis point and Zeus would suddenly pop up to make everything okay. Now the crack in "Flesh and Stone" is an interesting example of that, because in the context of a self-contained two-episode serial it really does come flying out of the blue but in the context of a 13-episode story arc it's a logical and welcome progression of a growing crisis for the Doctor. What's a viewer to do?

The crack generates great horror, as one by one Father Octavian's soldiers wander off to investigate a glowing light in the distance, only to silently cease to exist once they're out of sight. Octavian's own death is equally horrific, but in a different way. Trapped in a headlock by an advancing Angel, he lives only for as long as the Doctor doesn't avert his eyes. It's a nice moment, and both Iain Glen and Matt Smith play it very well.

The episode's epilogue is rather uncomfortable. The Doctor returns Amy to her home on the night before her wedding, and she immediately tries to have sex with him. It feels instinctively wrong for so many reasons. The Doctor is visibly distressed, and she doesn't take no for an answer. She's about to get married and seems intent on cheating with her fiancee, which reflects poorly on her character and makes her seem slightly unlikeable. Most of all it's pretty much the most overt intrustion of sexual themes into the series yet. Doctor Who remains at heart a program for children, albeit one that adults can freely enjoy as well. It feels prudish to say it, but the bottom line for me is that sex doesn't really have a place in the series. The scene does advance the season's overall arc - the universe is due to be destroyed on Amy and Rory's wedding day - but it still feels tonally misjudged.

Despite that last-minute failing "Flesh and Stone" is a great and wonderfully inventive episode. It leaves Season 5 with four good episodes out of five so far, and a quality ratio of 80 per cent.
Posted by Grant at 11:14 AM