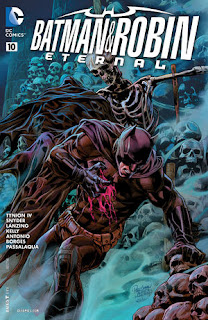 Batman & Robin Eternal #10 fully re-introduces Azrael and the Order of St Dumas to the DC Universe - this time seemingly tied in quite closely to the mysterious "Mother" who acts as the villain for this series. I suppose it's one way to make Mother an instantly significant figure in the Batman mythos. Earlier issues of this weekly series have tied her into the origins of Cassandra Cain as well. One wonders how many supporting and spin-off characters are going to get tied into this by time the series is over.

This issue is fairly well plotted, but feels a little flat on the scripting and dialogue level. The artwork is reasonable enough, but all in all it feels little the book is getting a little weak and bogged down. The focus this issue on Red Robin and Red Hood joining Bane to fight Azrael just felt rather ordinary.

I'm not a huge fan of Azrael either. He was introduced as a lead-in to a specific 1990s story arc, and outside of that storyline I'm not sure he has a decent enough purpose to bring back into the fold. Back in the day DC pushed him really hard with a solo book that struggled for more than five years. In today's market it's hard to imagine such a book surviving more than eight issues.

I really hope Batman & Robin Eternal picks up again, because for the first six or seven issues it really felt like DC was onto a winner. Now it seems like it's lost its way. (2/5)

Under the cut: it's a Batman special, with new reviews of Batman, Grayson, Gotham Academy and Detective Comics.

Jim Gordon finally has a proper showdown with the elusive Mister Bloom, while Duke gets unexpected help when escaping the Penguin's men. There's something slightly disappointing about the Batman-versus-Bloom fight that opens this issue. After six issues of build-up it feels remarkably anti-climactic. No surprise, then, that the issue ends on a much more open note than I had expected - the story isn't quite done. Much more interesting though, are the interactions between Duke and the still-amnesiac Bruce Wayne, which ends with one of those cliffhanger endings you can see coming, but can't decide until the final page if Snyder is actually going to do what you suspect. It's tremendously satisfying, and goes a long way toward saving the issue. Capullo and Miki's artwork is great as ever - they've confirmed they're moving on in 2016, which will be a huge loss for this title. (4/5)

"Robin War" continues, as Dick Grayson heads up the effort to train an entire team of teenage Robins. Someone, however, is leaking information to the GCPD. This is an exceptionally well-written issue, further cementing Tom King as the up-and-coming DC writer to beat. With Scott Snyder rumoured to be following Capullo and Miki out of Batman in 2016, I can't think of another writer in DC right now better suited to take over. Mikel Janin's art is great, and the issue is laid out with some brilliant panel breakdowns. So far this has been a fantastic crossover; I don't usually buy Grayson, but in this case it's a welcome purchase. (4/5)

"Robin War" doesn't even bother to wait a week for its next instalment, instead throwing it in here to the latest issue of Detective Comics. This book has been struggling pretty badly since Buccelatto and Manapul unexpectedly resigned, without a clear creative direction or a regular creative team. This month we get Ray Fawkes, who's a solid writer, and Steve Pugh, who's a great artist - so I suppose for now it's not worth complaining. It would be nice to get some consistently soon, though. The storyline advances pretty impressively though, teaming Dick Grayson up with Jim Gordon for the first time and furthering the Court of Owls' master-plan for Gotham's army of Robins. Three parts in, and this is already one of the best crossovers DC has done in recent years. Fingers crossed it continues. (4/5)

Guest artist Adam Archer fills in for Karl Kerschl, with this rather weak tie-in to "Robin War". There's yet another monster loose on the school campus, with Olive, Maps and their friends on the hunt to trap it. This book's beginning to feel just a little samey, with each issue bringing another sort of supernatural or supervillain encounter for the kids to confront and overcome. I did have a lot of hope for this series when it began, but at the moment I don't think it's living up to its excellent premise. With sales continuing to decline, I'm not sure there's time to turn things around. (2/5)
Posted by Grant at 6:51 PM