Doctor Who: "Victory of the Daleks" 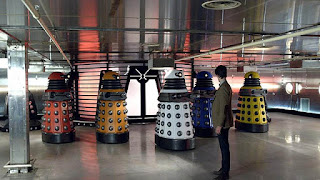 The Doctor (Matt Smith) is summoned to war-time London by Winston Churchill (Ian McNeice), who presents his latest weapon to fight the Nazi menace: the Daleks. Can the Doctor convince Churchill of the error of his ways and discover the Daleks' true motives before it's too late?

Now where should we begin? Let us not muck about: "Victory of the Daleks" is a dreadful episode of Doctor Who. The basic ideas at its foundation are terrible ones. The execution of those terrible ideas is awful.

It's almost a requirement of a new Doctor to face the Daleks - almost as if they're not fully legitimate until they've defeated the psychotic pepperpots at least once. Patrick Troughton got to debut opposite them in the peerless "The Power of the Daleks". Jon Pertwee got the time-travelling shenanigans of "Day of the Daleks". Even Colin Baker, whose tenure was cursed with poor script writing, managed to get the superbly satirical "Revelation of the Daleks". Poor Matt Smith is saddled with this: Spitfires in space and caricature Prime Ministers.

Here's the thing about Daleks: they're actually pretty difficult to write. They may be visually iconic, they may have a brilliant catchphrase, they may carry the momentum of five decades of pop culture behind them, but they're maddeningly difficult to make interesting and threatening. Writer Mark Gatiss fails completely with this episode. In fact he breaks a cardinal rule of script writing: show, don't tell. He tells us repeatedly, via the Doctor, just how evil the Daleks are, but we don't actually see them be that evil. In the end, apart from killing a few soldiers and making a half-hearted attempt at detonating a bomb all they do is shout a bit and trick the Doctor into resurrecting their species. As far as Dalek master-plans go, it's the most sedate they've ever been.

The resurrected Daleks, grandly calling themselves "the new Dalek paradigm", are an infamous let-down. The large, colourful bumper-car look is gone within a season or two. It's an undignified, poorly conceived re-design. The colours might have worked, but the distorted shape ruins their iconic silhuette and their size somehow makes them less threatening rather than more.

There's also little reason to set the episode in World War II London. It allows the episode to pointlessly feature Winston Churchill, the latest in a long and mostly tedious line of celebrity historical figures, but it doesn't actually contribute to the storyline in any meaningful fashion.

The episode is hobbled by structural issues. There are a lot of ideas to play around with here: Daleks masquerading as human servants, Britain attempting to use future technology to win the war, Spitfires in space, Dalek resurrections, a Dalek-created android that believes he's human, and so on. 20th century Who would have played these concepts out over four half-hour episodes. "Victory of the Daleks" gets 45 minutes. There's simply no time to play out each idea sufficiently to make it worth its while. Even when they are used they're misjudged. Professor Bracewell (Bill Paterson) discovers he's a robot about 13 minutes into the episode, leaving his character with nowhere else to emotionally go.

The Daleks introduce their upgraded form relatively late in the day, with no real opportunity to show why these "new paradigm" Daleks are superior. "The Power of the Daleks", upon which Gatiss has drawn some inspiration, was a masterpiece of the slow burn. It began with a single Dalek gliding around a human colony pretending to be a meek servant, and ended with Daleks storming through the colony exterminating human en masse until the floor is littered with corpses. "Victory of the Daleks" denies them that horrifying climax, and that renders the earlier scenes fairly pointless.

"Victory of the Daleks" is the worst kind of Doctor Who: the kind where you can see good ideas, but are forced to stare dumbfounded at the dreadfully sloppy and poorly developed execution. It's an episode to put up alongside "The Doctor's Daughter", "Battlefield" and "The End of Time" - you watch it, shake your head, and immediately start a list inside your head of all the places it could have been much, much better.

The best I can say about the episode is that Matt Smith gets a nice moment with a jam biscuit. Season 5 gets its first dud, and the quality ratio drops to 67 per cent.
Posted by Grant at 11:13 PM