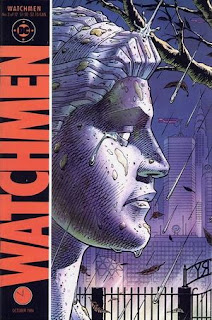 Welcome back to August 1986 for a quick look at what's out on comic book store shelves this week.

The second issue of Watchmen, Alan Moore and Dave Gibbons' widely hyped maxi-series, continues to impress. The Comedian's funeral brings back some bad memories for those who knew him, leading into some pretty confronting and upsetting material in the flashbacks. Meanwhile Rorschach continues his investigation into the Comedian's murder.

Alan Moore's script is exceptional, showing a slow, awful degradation of superheroes from the bright, colourful heroes of the 1950s into being the brutal, violent characters they seem to be turning into today. What's really impressing me is the panel layouts, ascribed to a neat nine-panel grid on each page. It gives both issues thus far a very measured, almost hypnotic quality. Dave Gibbons' artwork is just perfectly pitched as well, providing an even blend of abstracted, emotive art and a cold realism.

This is a bold, immensely fascinating series, and I can't wait to find out how things develop over the remaining issues. (5/5)

Under the cut: reviews of Blue Beetle, Blue Devil and Doctor Strange.

I've really been enjoying this new take on the old Charlton Comics hero. His introduction to the post-Crisis DCU has been handled really well, and each issue has presented a really nice blend of superhero action and character drama. This issue brings another old Charlton character into the fold; the Question, aka Vic Sage. He's well introduced, but it is rather odd seeing the character coming back at the same time that Moore and Gibbons' Watchmen is satirising him so heavily with their Rorschach character. The Question and Blue Beetle feel like a good match here - I'm keen to see how their joint investigation develops next month. (4/5)

Imps run amok for both the Blue Devil in Metropolis, and the assembled academics relaxing at his Miami retreat. While I do love the idea of academics studying superheroes - the Institute for Hyper-Normal Conflict is such a great name - I have to admit that the humour of this book is running a little long in the tooth. Kupperberg and Collins' artwork is sufficient enough, and I suppose Gold's script is as well, but there's just an overwhelming sense of making this comic because it's already being made and not for any driving creative reason. (2/5)

The bimonthly schedule that Marvel keeps applying to Doctor Strange is really beginning to get to me. The two-month wait between issues is really killing the story momentum, and it can't be helping sales. In this issue a date with Morganna ends with an interdimensional demon warrior gate-crashing and trying to kill Strange. When he's mortally wounded in the fight, he gives his powers to Morganna to win the day. Morganna looks great with the blue tunic and blazing sword. To be honest I would mind Marvel changing the gender of their heroes around on a more lengthy basis. Imagine if Pepper Potts could have an Iron Man suit, or if Jane Foster could be Thor? It's a fun script by Gillis this month, while Warner and Emberlin's artwork is great - particularly the two-page spread at the beginning that feels more like something out of John Carter of Mars than Doctor Strange. (3/5)
Posted by Grant at 5:22 PM