Babylon 5: "A Tragedy of Telepaths" 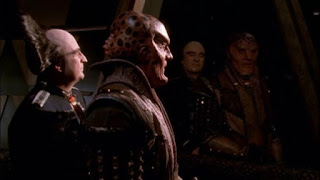 As Byron (Robin Atkin Downes) and his telepaths seal themselves up inside Down Below, Captain Lochley (Tracy Scoggins) takes emergency measures to end the crisis. Over on Centauri Prime, G'Kar (Andreas Katsulas) and Londo (Peter Jurasik) make an unexpected discovery. Along the galaxy's borders, cargo transports continue to be annihilated by an unknown enemy.

Byron is very upset this episode because a splinter group of his telepath cult have assaulted a security officer and broken into the station's armoury. The situation must be resolved through peaceful negotiation, he cries, which doesn't really fit with the manner in which he dived in and threatened the entire Interstellar Alliance last episode. It also doesn't explain why he's ordered his remaining loyal telepaths to use their powers to seal up the doors and keep station security from putting them all into custody. This whole storyline is a mess of contradictions, and as I noted in the previous review it's all based around a guest character - the regulars are by-and-large confined to the periphery. Even Lyta (Patricia Tallman) isn't really getting a lot to do despite spending the bulk of the episode by Byron's side.

For her part, Captain Lochley seems the most intelligent character in this interminable story arc. When some of the telepaths break ranks and assault people on the station, she's straight in communication with the PsiCorp to have Alfred Bester (Walter Koenig) on the station as soon as possible. It's a sensible move, and furthermore it's her job.  It's also nice to see Bester arrive on the station, and basically do his job as well.

Meanwhile it seems to have become John Sheridan's fate to forever more sit in offices having arguments with rubber-suit monsters. He gets a couple of scenes here negotiating between three rival governments, all of whom think one of the others is behind the cargo ship raids. Other scenes in the episode make it pretty clear that it's someone - or something - within the Centauri government that is driving the raids, so Sheridan's entire storyline here feels more than a little like padding. I feel really sorry for Bruce Boxleitner, who got so much quality story to work with in earlier seasons, and now feels surplus to requirements.

Before leaving Centauri Prime, Londo and G'Kar have just two more things to do. Londo notices a crazy increase in military spending since the Shadow War ended, which he finds tremendously suspicious and which we obviously realise is due to all of the cargo ship raids. The series is clearly moving closer to a point where this particular penny drops, and going by previous seasons it's unlikely to end happily. This storyline actually feels like Straczynski is getting his groove back, weaving in a new crisis for the characters to tackle in a measured and careful manner.

G'Kar works out there is still at least one Narn held captive in the imperial palace, and before long he and Londo have discovered G'Kar's old aide Na'toth (Caitlin Brown) in the bowels of the citadel. It's an oddly arbitrary character to bring back, since she was barely in the series to begin with, but it does provide a valuable resolution to G'Kar and Londo's joint storyline. They both experienced different kinds of hell during the Shadow War, and now one of the final open wounds can be closed and start to heal. I don't think it's a coincidence that the final shot of them sees them looking out of the window of a Centauri battleship. A near-identical shot framed Londo's horror at the invasion of the Narn homeworld all the way back in Season 2. Now the final Narn victim is on her way home, and Londo and G'Kar stand together. It's pretty much the single-best moment of the season thus far.

This is, all in all, a pretty shaky episode that seems less concerned with its own plot and more concerned with tying up a loose end and setting characters up for a climax in the following week. It has enough highlights to get it over the line, but this season really does feel like a massive step down in quality. We're ten episodes in, and the quality ratio rises to 60 per cent.