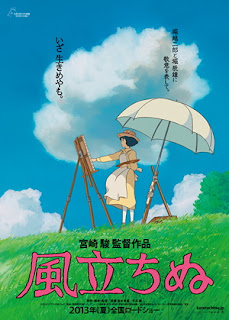 I have been putting off the day I would watch The Wind Rises, because it's purportedly the final feature film ever from the acclaimed director Hayao Miyazaki. Once I watched it, there possibly wouldn't any any more to see. Actually going by the odds that's almost certainly untrue. He's claimed he was retiring from making films before, and accidentally made more films. In fact one estimate has him announcing his retirement on seven separate occasions in 1986 (after Laputa: Castle in the Sky) and again in 1992, 1997, 2001, 2004, 2008 and 2013. True to form he's currently directing a 10-minute CGI short to screen exclusively at the Studio Ghibli Museum near Tokyo, and my gut says if he likes the CGI medium there will be a feature to follow.

For now The Wind Rises is it. It feels like an unusual film. It retains the animation style, and the beautifully observed human movements and expressions. It boasts a superb orchestral score by regular composer Joe Hisaishi. It has a remarkable warmth and emotional resonance. Beyond that it stands pretty far apart from Miyazaki's other works. There's comparatively little whimsy to the piece, and no fantastical elements. Instead its a biographical drama based on the aeronautical engineer Jiro Horikoshi: the inventor of the Mitsubishi A6M Zero fighter plane.

The film begins in 1918 when a young Jiro, with eyesight too poor to become a pilot, is inspired by stories of Italian designer Giovanni Battista Caproni to become an aircraft engineer. From there he travels to Tokyo - right in time for the 1923 great Kanto earthquake - and meets a young woman named Naoko. He joins the team at Mitsubishi and gradually becomes their most talented engineer. His development of a badly-needed fighter plane is paralleled by his growing relationship with Naoko.

The film is rich with beautiful set pieces and perfectly composed moments of character. Jiro is a fascinating lead, benefiting in particular from fellow director Hideaki Anno's vocal performance which makes him sound less like an anime character and more like an actual human being. Unsurprisingly the film is at its best in scenes of flight: it has been a common theme throughout Miyazaki's career, and the dream sequences where Jiro meets Caproni represent the movie at its very best. The period detail is remarkable, as is the representation of the various 1930s aircraft in Japan and Germany. Aeroplane enthusiasts will have an absolute ball.

There is a nice balance here between drama and comedy, as well as some occasional moments of real threat: Jiro is designing aircraft in an increasingly militarised and paranoid environment, and before long there's talk of secret police, traitors and war with the United States. Miyazaki does a wonderful job of balancing all of these elements. It is also great to see so much of the film dedicated to Naoko, a talented artist who grows increasingly afflicted by tuberculosis. It maybe should be noted that Naoko is an entirely fictional character, as is much of Jiro's story. He did invent the planes the film shows him inventing, but beyond that there's little factual accuracy within his life story.

If there is a problem with the film, it's in the manner in which Miyazaki seems to side-step broader issues about Japanese imperialism and World War II. By the end of the film Jiro does bemoan how his extraordinary aeroplane was manufactured and utilised for war, but for the bulk of the film it's as if Miyazaki wants to completely avoid discussing the reality of what Jiro has produced. he's clearly fascinated by the planes themselves, and is a master of the human drama of the piece, but when it comes to the politics and the morality of the events he shies away. This feels like a missed opportunity, particularly given Miyazaki's own firm pacifist stance and the debate that's been raging in Japan in recent years over re-establishing and using their military forces internationally.

Despite this flaw The Winds Rises is beautifully animated and assembled. It does seem an oddly serious and grounded work upon which to sign off such a stunning career, but at the same time it fits in with his earlier works rather well. It feels like a bit of a personal piece: all of the fantasy extravaganzas for Miyazaki's audience, and at the end a deeply personal project just for himself. Given the immense joy those earlier films have given audiences, that arrangement seems very fair.
Posted by Grant at 7:25 AM