Star Trek: The Next Generation: "Qpid" 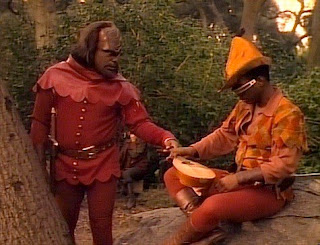 When the Enterprise hosts an archaeology conference, Captain Picard (Patrick Stewart) is reunited with Vash (Jennifer Hettrick), the woman with whom he shared an adventure on Risa a year earlier. Their reunion is interrupted by Q (John De Lancie), the omnipotent entity who has decided it is time to repay Picard's former assistance with a gift.

Time has come around again for The Next Generation to present its annual Q episode. After making his debut in "Encounter at Farpoint" the character has returned once a year like clockwork to tease and torment the Enterprise crew, usually in a humorous fashion. This episode is no exception, presenting an out-and-out comedy in which Q sends Picard and his bridge crew to Sherwood Forest for an adventure as Robin Hood and his Merry Men.

It all works tremendously well. I think a key part of its appeal is just how much fun the cast seem to be having. There's an infectious quality to the comedy, where since the characters all appear to be enjoying themselves it's hard for the viewer not to feel the same way. Michael Dorn in particular scores a couple of laugh-out-loud moments as Worf, but to be honest most of cast get at least one moment to shine. The episode is split into two halves: the first is set on the Enterprise, and the second inside Q's simulated Robin Hood adventure. Surprisingly it's in that first half that most of the most jokes can be found. It's just enormously silly fun, whether it's Riker (Jonathan Frakes) finding out the captain does an impression of him, or Dr Crusher (Gates McFadden) relishing Picard's discomfort at her meeting Vash in his quarters, or even the deadpan manner in which Riker responds to word that Q wants to give Picard a gift ('I'll inform the crew.'),

The episode was broadcast in the lead-up to Summer 1991, in which America got not one but two Robin Hood movies. Obviously it was Robin Hood: Prince of Thieves, starring Kevin Costner, that was the major hit, but there was also Robin Hood starring Patrick Bergin that made it all feel like Hollywood had temporarily gone Sherwood crazy. This episode merely capitalised on the public interest (an early draft set Q's fantasy world inside Camelot).

The most interesting character in the episode is Vash. She's understandably upset when she discovers nobody on the Enterprise has heard of her, and that Picard kept their previous romance a secret. She's openly planning to engage in criminal activity under Picard's nose. When she is transported to Nottingham Castle, and much to Q's surprise, she immediately abandons waiting to be rescued in favour of seducing Sir Guy of Gisburne to get herself out of harm's way. By the episode's end she's effectively dumped Picard for Q, a development that simultaneously feels surprising yet completely understandable. It basically acts as the episode's final cruel joke: Q not only torments Picard for an hour but steals his girlfriend as well.

That sounded a little sexist, and I don't think that's entirely a coincidence. There's a slightly disappointing sexist line running right the way through "Qpid". Vash is positioned from the outside as an emotional character in contrast to Picard's stiff rational attitude. When the crew are transported to Sherwood, only the male officers get to play with swords; Troi demonstrates poor skills with a bow, and during the climax she and Crusher resort to dropping pots on guards' heads. It all takes the shine off the episode a little. (Ironically, of the entire regular cast only Marina Sirtis and Gates McFadden had previously trained in sword fighting for the stage.)

"Qpid" is silly, inconsequential fun, and it's nice to get an episode like this from time to time. Season 4 is now up to 14 good episodes out of 20. The quality ratio rises to 70 per cent.
Posted by Grant at 9:50 AM