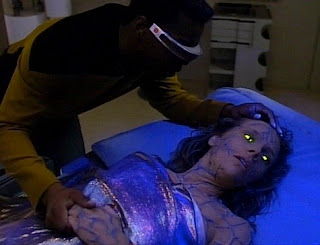 Five years ago Geordi La Forge (LeVar Burton) accompanied an away mission on Tarchannen III. Now three of the five officers involved have vanished, and Geordi is reunited with the fifth to solve the mystery of their disappearance before it happens to him as well.

"Identity Crisis" is a noble failure. There's an intriguing idea at its centre: an alien infection that basically transforms its host into an alien, who then travels to its new home planet in order to be with its own mutated kind. It's an opportunity for great body horror, and that might be one of the episode's major problems. Star Trek: The Next Generation is essentially family entertainment, and the sort of disturbing transformations that lend themselves to this sort of story concept really don't lend themselves to the relatively neat and clean style of the series overall. As a result it's an episode that pulls its punches and winds up weakened and a little dull as a result.

I suppose it is nice to have an episode based around La Forge in which he's not being an awkward stalker, and certainly LeVar Burton takes the opportunity to run with the material. He shows La Forge gradually becoming more and more stressed and panicky as he runs out of time before he transforms into an alien like his former crewmates. It's also a fairly strong episode for Brent Spiner, who does a great job of expressing Data's anxiety at potentially losing his friend.

It is also well worth praising the episode's great use of the holodeck, not as a recreation site but as a research tool. La Forge recreates the original video recording of his Tarchannen III mission inside the holodeck, and basically works through it element by element as he analyses precisely what happens. It's a nice piece of forensics and is fascinating to watch.

It's once the transformations begin that the episode gets a bit silly. The aliens are inventively realised, with glowing blue veins covering their bodies, but it can't be denied that the look faintly ridiculous at the same time. The episode's climax, featuring La Forge's old crewmate Susanna Leijten (Maryann Plunkett) trying to talk him back towards his human colleagues, is remarkably twee and corny. It all works to an extent, but not a great extent. It is one of those episodes that could clearly have been written more effectively.

At least Nurse Alyssa Ogawa finally gets a surname. This is a mediocre episode overall, but it has some excellent moments - notably the holodeck analysis - and does sort of amiably stumble along. It qualifies as good, but only barely. It is easily skipped as well. This season has now featured 12 good episodes out of 18. The quality ratio is now 67 per cent.
Posted by Grant at 11:40 PM