Star Trek: The Next Generation: "Half a Life" 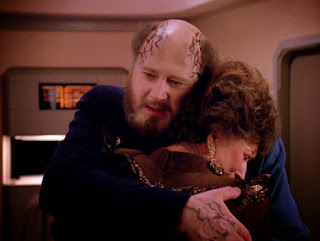 Lwaxana Troi (Majel Barrett) has returned to the USS Enterprise. Her return coincides with the arrival of Timicin (David Ogden Stiers), a scientist working to restore the dying sun around which his home planet orbits. Lwaxana and Timicin quickly enter into a romance, only for Lwaxana to learn that a custom of his home planet will see Timicin commit ritual suicide within days.

"Half a Life" is a genuine surprise, chiefly because it is a Lwaxana Troi episode that is not a comedy. Instead this brassy, self-confident character - usually presented for strained laughs at her expense - is the centre of a sensitively written and rather tragic romance. It's also an episode that presents a very different alien culture in a surprisingly respectful manner.

David Ogden Stiers gives a wonderful reserved performance as Timicin. He is unfamiliar with his surroundings, and both awkward and nervous, and Lwaxana's aggressive overtures are visibly slightly threatening at first. It is only later in the episode that we realise how much stress Timicin must be under: he is undertaking a once-only experiment to artifically recharge a sun, because as his 60th birthday is just days away he only has the time to do it once. When he turns 60 his family and friends will assemble and watch him commit suicide to avoid ever becoming a burden on them in his old age. Once he begins to fall in love with Lwaxana everything becomes even more stressed and confused, since he had prepared himself to die but now passionately wants to live.

Majel Barrett taps new depths for Lwaxana here, finally given worthwhile material and allowing herself to play drama as well as comedy. Her deep upset when she discovers what Timicin is expected to do is very effective, particularly when she challenges Picard (Patrick Stewart) to do something to stop it. Picard of course can do no such thing: the Federation is very clear about non-intervention with alien cultures, and he isn't going to risk a diplomatic incident to stop one man from going through with a cultural tradition he appears to want to observe.

There is also a small but strong performance by Michelle Forbes as Timicin's daughter, who arrives on the Enterprise to plead with him to continue with his "Resolution". It is an important character to include, since it beds down just how strongly the people of Kaelon II believe in ritual suicide as well as the shame Timicin is bringing to his family by vacillating. Forbes clearly made a strong impression on the producers as well, since she returns in Season 5 as the recurring character of Ensign Ro Laren.

The episode marks the Star Trek debut of writer Peter Allan Fields, who will go on to write or co-write another 12 episodes of The Next Generation and Deep Space Nine including "The Inner Light", "Duet" and "In the Pale Moonlight". He's one of the best writers the franchise had, and this episode is just the first indication of that. It is smart, gentle and timely. It tackles issues of ageing, family obligation and cultural difference with a remarkable grace. It is an unexpected and welcome pleasure. With 16 good episodes out of 22, Season 4's quality ratio rises once again to 73 per cent.
Posted by Grant at 8:59 AM