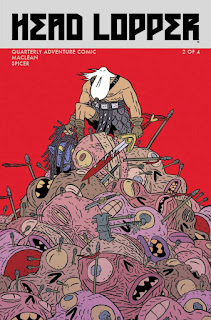 Andrew Maclean is doing something really stunning with Head Lopper, a quarterly fantasy comic about a bearded swordsman dragging the severed head of a witch around behind him. It's quarterly because he's telling his story in big 50-odd page chunks, which actually makes everything a lot more readable and immersive. You can really chew into an issue, and the big, bold panel layouts don't mean you're getting starved for story.

This issue sees Norgal make camp in the ruins of some massive ancient graveyard, which immediately leads to an attack by ghosts and then zombie giants (or is that giant zombies?). The action is beautifully but simply expressed, and the banter between Norgal and the beheaded witch Agatha is witty and sharp. There's also some nice world-building in between, as the story cuts away to other characters and a broader story going forward.

I mostly like this comic because it feels as if Maclean is actually trying to do something fresh and interesting with the standard comic book format. The longer length really does help it out and make it feel a lot more entertaining than your average action-based title. The bottom line: this is a really great comic book. (5/5)

Doctor Who: The Eighth Doctor #2

George Mann provides a reasonably entertaining storyline for this second issue, but it does feel remarkably by the numbers. The only real problem I have here is Emma Vieceli's rendition of the Eighth Doctor. Her art is in itself great, and beautifully coloured by Hi-Fi. Her Doctor simply doesn't look enough like Paul McGann, either in his TV movie or his "Night of the Doctor" looks. Instead it's somewhere vaguely in between that really doesn't capture his face very well. Sadly in these kinds of spin-off titles getting the actors' likenesses down in a pretty important part of selling the story. (2/5)

Doctor Who: The Eleventh Doctor #3

While the Doctor is interrogated, his companions are lost inside a labyrinthine dying TARDIS. This is a sensational issue, and one of those ones that justifies sticking with this book. While Titan's Doctor Who books sometimes feel a bit weak or ordinary, they occasionally knock it out of the park with a smart, inventive and imaginative take on the series. This issue was a real surprise, and absolutely did not go in the direction in which I thought it was. I'm also continuing to dig the references to the War Doctor's exploits in this current storyline. (5/5)

The Massive was a fantastic post-apocalyptic thriller set after a massive series of environmental disasters all-but eliminated the human race. It followed the former members of an eco-terrorist cell known as Ninth Wave. This new miniseries jumps back to before the disaster to show the Ninth Wave gang in their prime. There's a well-crafted little introduction here, showcasing all of the original characters but also telling enough of a clear story for new readers to catch up. The only lingering doubt I have is whether this story needed to be told. We already know what happens next. We already know where the characters wind up. It's a great issue, but that doesn't stop it from being an unnecessary one. (4/5)
Posted by Grant at 7:32 AM