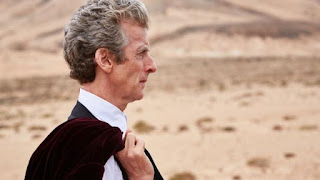 Season 9 has been, to my mind, the best season of Doctor Who since it returned to our screens in 2005. The quality of the scripts have been much stronger generally, and certainly more consistent. Peter Capaldi has settled into the title role and given his Doctor new angles and depths. The broad change in structure from self-contained episodes to two-part serials have given each story room to breath, and a very welcome ability to devote several minutes at a time to proper drama and dialogue between characters. There has also been a fair amount of experimentation, including an attempt at a found footage format and last week's solo outing. Basically if you couldn't find something to enjoy in Doctor Who this year, then it's probably time to hang up your scarf and stop watching the show altogether.

Of course all of this new-found quality puts extraordinary pressure on the season finale. Doctor Who also seems to aim for a big, show-stopping final episode of course, whether it's a mass Dalek invasion in "The Parting of the Ways" or the Master taking over the Earth in "The Last of the Time Lords", or even more recently Missy's Cyberman invasion in "Death in Heaven". In many ways this final episode, "Hell Bent", feels like it has higher stakes than most. For one thing it's never felt quite so personal for the Doctor himself.

We begin the episode with Clara still dead. The Doctor seems hell-bent on revenge - hence the title - and has just spent four and a half billion years in a time-looped torture chamber refusing to tell his captors what they want to know. Those captors have turned out to be the Time Lords of Gallifrey. He's been hunting for them for two seasons, and now that he's been reunited they've murdered his best friend. Like I said: it's never felt quite so personal.

The Time Lords are always a risk in Doctor Who. They have such enormous potential for drama, but all too often that potential is squandered or outright ruined. They were outstanding in "The Deadly Assassin", and arguably still quite dramatic for much of "The Invasion of Time", but then in "Arc of Infinity" it was like visiting a suburban shopping mall. Their previous return in "The End of Time" started off in an outstanding dramatic fashion, and quickly descended into pointless ranting and David Tennant shouting continuity minutiae.

Here they're actually used rather sparingly once you think about it. They figure prominently in the first act, peripherally in the second, and are entirely absent from the third. The opening few minutes are an outstanding sequence of an angry Capaldi silently waiting in the iconic desert shed from "The Day of the Doctor" and "Listen" while Time Lord guards, then their War Council General, and then finally the Time Lord President himself turn up to demand he speaks. Then it's a simple matter of undertaking a bloodless coup, with the entire Time Lord military backing him up solely on his reputation from the Time War. It's a regular tic of Moffat's, to have the Doctor win based solely on repute, so it's not a surprise to see it here. It's also a clever reversal in a way: the Doctor, who always wins with his smarts and his words, not actually saying a word for several minutes.

There's a nice sense of pulling continuity threads together: the Time Lords returning Gallifrey to the universe near the point of its collapse, the return of Rassilon, the Sisterhood of Karn and the War Council General, the confession dial, the question of the hybrid that's been kicking around all season, and of course the Doctor's search for Gallifrey and rage at Clara's death. It all pulls together really smoothly - not just a finale for the season, but a finale for the last three years of the series. Even Missy's setting up of the Doctor and Clara together gets an explanation. Most provocatively of all for long-term fans, Steven Moffat dares to remind us that the Doctor is half-human. Given how much of the season has dwelled on the concept of hybrids it would have been odd not to mention it at least once.

The second act of the episode is the most interesting. It seemed such an un-Doctorish thing to seek revenge. He's cold, he's brutal, he even shoots somebody. I imagine some viewers will find the Doctor shooting the General difficult to accept. Personally I found it fit perfectly well within the context of the episode.

It does all seem off-kilter and wrong - until the penny drops and it becomes clear the Doctor isn't engaged in revenge at all. It's a rescue mission to save Clara from death and continue travelling with her for good. Suddenly it all feels like Doctor Who: the running down corridors, the frantic chases, the use of smarts against powerful enemies. In one absolutely beautiful scene they even steal an old TARDIS with the Hartnell era console room. I know it was just for one episode, but I would love for it to be the TARDIS interior again. Even 50 years on it's still such an elegant and effective look.

Opinions on the episode's finale will I suspect be sharply divided, depending on how each individual viewer feels about Clara. Once again she's left the Doctor only to return (this marks the fifth occasion, in case anybody's still counting), and then leaves for a sixth and presumably final time. I love the idea that the hybrid is actually the Doctor and Clara together, so addicted to each other's company that they'll risk destroying the universe to stay together. It's angle I don't think many had guessed.

I really liked Capaldi's performance in this episode, so desperate to just keep Clara alive and by his side that he's become a ranting madman. He gets such a wonderful range of emotions to perform here, particularly in those wonderful opening scenes. I definitely don't like the Doctor's attempt to erase Clara's memory of him without her consent - indeed against her direct wishes. He already did this once in "Journey's End", in that case to Donna Noble, and it was a cruel betrayal for both the viewers and the Doctor's integrity as a good person - he committed an assault on a close friend. To see Steven Moffat veer so close to Russell T Davies' mistake was a real worry. He backs off at the last minute, turning it into a 50/50 chance of who between the Doctor and Clara forgets the other, but it still felt deeply unpleasant for a moment.

Reversing the audience expectations of the final scene - the Doctor visiting Clara and turning out to have no idea who she is, was unexpected and beautifully played. Clara's final coda, heading off into the universe in her own TARDIS with Ashildr, was not quite so convincing. It feels mean to say it, but I think I would have preferred Clara to remain dead. Not everybody has to live. She's been such a difficult character for me to enjoy. Partly it's been Jenna Coleman's performance, which has never gelled with me. Partly it's her character's slightly self-important personality. Mainly it's the way she's been constantly shoe-horned into being the most important person the Doctor has ever met, not because we've seen her importance but because dialogue in each season constantly hammers home that she is. I am not sorry to see her depart, apparently for good but after this many false exits who can say for sure?

The Doctor's final scene I adored. Alone in the TARDIS, but not bereft like his recent predecessors when they lost companions. A new sonic screwdriver, a new lease on life, a lot of dangling plot threads tied up. I do wonder if Steven Moffat wrote this episode in the expectation that he was leaving as executive producer. It really does seem to wrap up his entire tenure on the series in the best possible way. And this review wraps up Season 9. I'll probably do a quick look back over the season as a whole in a day or two, but for now it's worth noting that it winds up with 12 good episodes out of 12: a quality ratio of 100 per cent.
Posted by Grant at 10:43 PM