Babylon 5: "In the Kingdom of the Blind" 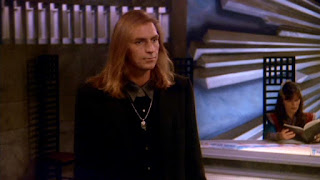 Byron (Robin Atkin Downs) ups the ante in his fight with the Interstellar Alliance, and gets his army of telepaths to scan the various ambassadors' minds for damaging intelligence. Londo (Peter Jurasik) and G'Kar (Andreas Katsulas) return to Centauri Prime to begin preparations for Londo's ascendancy to the throne.

Byron's attempt to blackmail the Alliance probably couldn't come at a worse time, since a mysterious force is destroying their ships along various trade routes and everybody is more than a little paranoid and on edge. Telling their collected ambassadors to give him a planet or have their state secrets revealed to all and sundry probably wasn't the wisest move. In fact it's a ridiculously stupid move, and one wonders nobody in Byron's camp tapped him on the shoulder and told him so. There's not even a build-up. There's no attempt to negotiate, or to plead a case to the Alliance Council. Byron simply goes straight for the threats - and it's pretty clear already he's just signed his own death warrant. He's not just an unlikeable character, but a stupid one as well.

There's some half-decent drama here, but it simply doesn't work very well because it's underpinned by so much stupidity. No one acts in a logical fashion here, but rather as a means to push the plot in a specific direction. Matters aren't helped by Robin Atkin Downes' weirdly affected performance either. I don't believe in his character for a second, whether due to the acting, the direction, the script, or - as I suspect - all three.

The biggest problem with Byron is not the character himself or the manner in which he's betrayed. It's that he's a plot sink: in every episode in which he features more and more screen time and agency is delivered to him. The regular cast are hardly being used at all. Sheridan (Bruce Boxleitner), who spent the last three seasons as the effective protagonist of the entire series, has been relegated to being a supporting player in his own show. Season 5 always faced an uphill struggle, since the vast majority of storylines were neatly resolved by the end of the fourth year, but it's as if Straczynski is actively putting barricades in the audience's way. The scripts are being written explicitly to make us side with Byron, but his actions and dialogue make him actively impossible to like.

Londo and G'Kar's return to Centauri Prime also promises a lot of drama, particularly given each man's respective experience there in recent years. Unfortunately the whole comedy double-act schtick of this season follows them there. The result is a lot of tiresome mugging on G'Kar's part intimidating Centauri nobles and making them feel uncomfortable. It really is sad that all of the character development undertaken in Season 4 seems to have led to this: a de-fanged, comedic figure of fun.

There is some decent material for Londo as he meets the Centauri Regent, who appears both frail and more than a little emotionally unhinged. He also finally gets a name: Virini. We've known for about a season that he's been under the control of the Drakh, following the loss of their home planet Z'ha'dum. Now the results of their influence are becoming a little clearer. His arc seems the opposite of G'Kar's right now: whereas G'Kar was a highly dramatic character now returned to being comic relief, Virini was established as a humorously fussy bureaucrat and is now a pathetic, rather tragic figure. Sadly this small highlight doesn't outweigh just how poorly developed the telepath elements are.

Another poor episode. Of the nine episodes watched so far five have been what I'd classify as good, by which I mean they're at least average. The quality ratio drops to 56 per cent.
Posted by Grant at 7:02 PM