Doctor Who: "The Time of Angels" 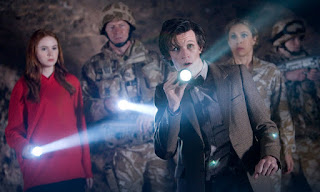 The Doctor (Matt Smith) and Amy (Karen Gillan) come to the aid of the Doctor's mysterious future associate River Song (Alex Kingston). The starship Byzantium has crashed into a long-abandoned stone labyrinth on the planet Alfava Metraxis, and its cargo - a Weeping Angel - has escaped into the maze. Together with a squadron of clerics they head into the labyrinth to catch and disable the Angel before it's too late.

"The Time of Angels" was the first episode of Doctor Who that Matt Smith and Karen Gillan made, and if you weren't told that you wouldn't have guessed it. They leap into their roles seemingly fully-formed: engaging, believable and appealing. They're joined by Alex Kingston as River Song, making her second appearance in the series after 2008's "Silence in the Library". On top of that it brings back the Weeping Angels, the villains of the immensely popular and critically acclaimed Season 3 episode "Blink". The difference in quality between this episode and the last ("Victory of the Daleks") is so pronounced it's liable to give viewers whiplash.

The Weeping Angels are a remarkable invention, and are typical of Steven Moffat's approach to Doctor Who. They are, in effect, the children's playground game "What's the Time, Mr Wolf?" (aka "Grandma's Footsteps") transformed into a monster. They can only move when no one is looking at them. Take your eyes off them for a second, or even blink - hence the title of their debut episode - and they can move towards you. They're wonderfully creepy and about the scariest monster Doctor Who has ever featured. The problem is that they really did feel like a one-off monster in "Blink". It was a great conceit, but kind of the conceit you could only do once. Putting them into a two-part sequel was a risky move.

This is where I think Steven Moffat did something inspired, which was to steal liberally from James Cameron's film Aliens. Aliens worked in part because it escalated the threat of the original film Aliens. That film had one sleek insectoid killing machine roaming a starship, so Cameron had dozens of aliens roaming a colony. Aliens isn't scary because the monster could leap out from anywhere, it was scary because the monsters could leap out of everywhere. That's pretty much exactly what Moffat does here: the Doctor, Amy and River embark into an ancient, crumbling labyrinth to track down one angel only to discover there are actually dozens of them.

Of course riffing on Aliens means finding some space marines. In typical Moffat fashion they're not just soldiers but priests. We never find out precisely how this works, but they're a bunch of armoured, well-armed clerics led by Father Octavian (the always solid Iain Glen). It's a nice, slightly surreal touch that adds a lot of colour to what would otherwise have been dull, ordinary soldiers. It's also a nice, albeit unexpected way to emphasise the Doctor's nature as a man of science - some of the David Tennant episodes were making him positively messianic. Here he's inadvertently offended a priest with his offhand anti-religious comments.

Aliens is not the only text being shaken upside-down for loose change. An extended sequence sees Amy menaced by a video recording of an Angel and somehow infected by it. It's all drawing liberally on Koji Suzuki's Ring, and adds yet another level of horror to the Angels as a monster. In their first appearance it was vital to stare at them at all times, and never even blink. In "The Time of Angels" this is transformed into needing to stare at them but also making sure not to stare at their faces, unless you get an Angel inside your head and start to die. It also introduces the idea of a monster that can kill you from inside a television set - as presented to a nation of children from inside a television set.

Even the regular Angels are particularly nasty here. In "Blink" they simply transported people back in time to feed on the resulting temporal energy. Here they're getting all the energy they need from the leaking engines of the Byzantium, so are finding it much more enjoyable to just sneak up and snap people's necks. They're a particularly cruel and sadistic species, really. I'm not sure Doctor Who has one that's crueller.

The episode also reunites the Doctor with River Song, his mysterious close friend from his own future. The first time he met her she died. Now, further back along her timeline, we discover she's in prison for murdering someone. Moffat's script doesn't do a very good job of hiding the fact that it's the Doctor she has murdered. While a poorly hidden development, it is certainly a provocative one.

Science fiction, action, horror, time travel, great dialogue and wonderfully energetic performances: "The Time of Angels" is the best episode of Season 5 in the rewatch so far. With three good episodes out of four, the season's quality ratio rises to 75 per cent.
Posted by Grant at 5:01 PM