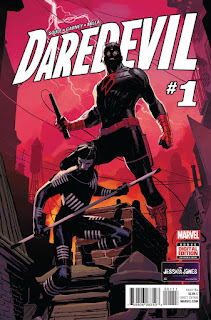 Daredevil has always been a relatively dark character, but in recent years he had seemed to get ridiculously bleak. A series of writers beginning with Brian Michael Bendis appeared to push the character further and further down a hole until he was pretty much the most depressing thing either of the big two superhero publishers were putting out there. That all changed when Mark Waid took over writing the book a few years ago. He made the book brighter and funnier. He kept the darkness around the edges, but it became a much more engaging and entertaining comic. This was emphasised by the wonderful artwork of Paolo Rivera and Chris Samnee. For a good four years or so - it was the single-longest run on the character by any writer - it was one of the best comics out there.

That's an awful lot of pressure for new writer Charles Soule, who takes over writing Daredevil for its latest relaunch - its second in about as many years. Soule is a great writer, and after his exceptional run on She-Hulk I was pretty convinced he was a great person to take over from Waid. For one thing he's a lawyer, which guarantees some excellent material for Daredevil's alter-ego Matt Murdock in the courtroom.

Sadly, and I assume it's by editorial edict, the book has dived headlong back into the dark, dingy style of Daredevil comic. Ron Garney's artwork is grim and gritty, and Matt Milla's moody, almost murky colours drive the tone even harder. It's as if all of the work done by Waid to make Daredevil/Matt a more entertaining character has been abandoned wholesale. There's also a huge jump in story here that I assume will get explained out in future issues. He's back in New York, despite being never allowed to practice law there again. His girlfriend Kirsten McDuffie is nowhere to be seen. He has a sidekick named Blindspot, and his best friend Foggy doesn't want to see him any more. Oh, and nobody knows Matt Murdock is Daredevil any more.

I respect both Soule and Garney's talents enough to give this book another issue, and on its own merits this is reasonably high quality stuff, but really: everything that made Daredevil a must-read for the past four years is gone. (3/5)

Under the cut: reviews of Batman and Robin Eternal, Doctor Strange and Revival.

Another strong issue for this weekly series that, despite its title, doesn't really have much Batman in it at all save for flashbacks. Dick and Harper remain in Prague trying to find Cass. Tim and Jason team up with Bane to break into the Order of St Dumas - which means of course that yet another element of the pre-New 52 Batman mythos is getting re-introduced to continuity. I'm not sure if that's a good idea or not: Azrael was pretty much invented for the "Knightfall" story arc, and I can't see any urgency in bringing the character back now. We'll see next issue, I guess. (4/5)

There's something oddly frustrating about this third issue of Doctor Strange. It's as if the momentum of the first two issues has been dropped, and instead we've got a muddy retread going on of plot development we already know. The panel layouts and colours are also rather difficult to read. The art doesn't guide the eye, and with each page as busy as it is that's a pretty huge problem. I adore Stephen Strange as a character, and I do think he has enormous potential as a comic book hero, but unless things pick up considerably next issue I don't see this particular volume fulfilling that potential. (2/5)

Dana goes hunting for a creeper, while Em gets kidnapped from the holding facility. This is another pretty significant issue for Revival, pulling long-hanging plot threads together and continuing the build to what I assume is a rapidly approaching conclusion. It feels like we're approaching the end of something here, maybe not the comic overall but certainly some of its core mysteries. Beyond that there's not too much more to say that I haven't said before. Norton's artwork is sensational, as is Englert's effective colouring. Tim Seeley has an outstanding ability to generate great horror in his writing, and there are a few moments here that really show that talent off. (5/5)
Posted by Grant at 4:56 PM