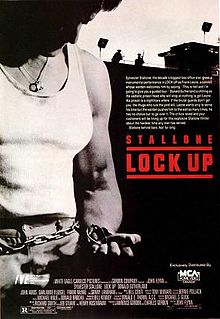 Frank Leone (Sylvester Stallone) is a convict living out his final six months in a minimum security prison. Without warning he is transported in the middle of the night to the maximum security Gateway Prison, whose sadistic warden Drumgoole (Donald Sutherland) bears a personal grudge against Leone. With Drumgoole hell-bent on breaking Leone's spirit, how long can Leone last before something snaps and he winds up trapped in prison for life?

Fair warning from the outset: Lock Up is a terrible movie. Its storyline is a dreadful pile of obvious clichés, the characters are all stereotypes, and the dialogue is consistently predictable. Furthermore it's awfully unrealistic, with a plot that doesn't bear much scrutiny before it all falls apart.

On the other hand, if you lived through the 1980s there's still something strangely watchable about these old action movies. They're like a warm, reassuring blanket, giving us characters and stories that won't surprise so much as comfort. We know what we're going to get with a film like Lock Up. We can find enjoyment in seeing Sylvester Stallone flex his muscles and be the idealistic hero. Have no doubt: this is a bad film. Don't also doubt that I have an absolute ball watching it.

Sylvester Stallone is, when all is said and done, a slightly mystifying actor. There are two main kinds of actor - good ones and bad - and as a general rule the good actors appear in good films and the bad actors appear in bad. Stallone is one of those odd outliers. He's a genuinely good actor, capable of developing rounded and believable characters and always maintaining a strong and enjoyable screen presence. As a rule he sucks at picking projects. This is particularly true in the 1980s and 1990s, where he seemed hell-bent on challenging Arnold Schwarzenegger as the world's most popular action star. The thing is that much as Stallone may have wanted to be an action star, at heart he's always been a dramatic actor. His best work is in the likes of Rocky, First Blood, Copland and Creed, and not in action vehicles like Daylight, Cobra or indeed Lock Up. He's a strong and identifiable lead as Frank Leone, but he's working with a really obvious and perfunctory screenplay. He feels wasted, but at the same time he's clearly the film's best asset and most satisfying element.

There are a number of other entertaining performances in the film, but generally because they're so ridiculously over-the-top and overblown. Donald Sutherland plays pretty much the most unrealistically evil prison warden in film history, so mean-spirited and conniving that it's a wonder he doesn't twirl his moustache. Sonny Landham gives a similarly exaggerated performance as Chink, the prison's violent and murderous "top dog". John Amos actually manages to straddle a line of some sorts, playing his character Captain Meissner as a cold, fairly brutal man hidden behind a pair of mirrored sunglasses but ultimate a much fairer-minded and more realistic character than one would expect. The film also allows the viewer to see Tom Sizemore in an early, fairly irritating role as fellow inmate Dallas, and there's even a blink-and-you'll-miss-it chance to see future action Danny Trejo as one of Chink's prison gang.

The film is remarkably well shot by director John Flynn (Rolling Thunder) and cinematographer Donald E. Florin. The only thing that lets it down is the painfully generic and stereotypical screenplay. The film was shot when Stallone found a gap in his schedule, and an old script was given a frantic rewrite while the movie was shooting. That all shows - there are occasional flashes of wit and intelligence in between the drudgery of the plot.

Then again, that sort of awful script is part of what gives films like this their charm. It's the movie-going equivalent of "slumming it"; we know going in that the film is going to be kind of awful, and we spent two hours bouncing between laughing with the film and laughing at it. In the end it's a ridiculous movie, but kind of entertaining as well. It's filmmaking as junk food: you know it's probably bad for you, and you know you'll likely regret it at some point. At the time though, it's oddly satisfying.
Posted by Grant at 9:16 AM