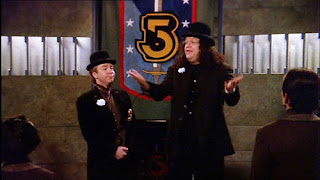 Babylon 5 receives a visit from popular comedians Rebo and Zooty (Penn and Teller). The Brakiri temporarily purchase part of the station to allow them to celebrate their mysterious "day of the dead" - a ceremony that leads to unexpected conversations for several of the station's residents.

It's been 57 episodes since anyone other than J. Michael Straczynski wrote a script for Babylon 5 - not since Larry DiTillio wrote "Knives" all the way back in Season 2. The drought is broken by popular novelist and comic book writer Neil Gaiman, who contributes this slightly odd effort about people meeting and speaking with the souls of the dead. It's only partially successful, but does have a lot to recommend and certainly feels like a much more effective script that what Straczynski himself has been providing to Season 5.

Babylon 5 has a strange relationship with the dead. Unlike pretty much every other space-set science fiction series ever made, it actually posits that there is some kind of existence beyond death. Furthermore it's demonstrated that souls are real and tangible things, and that they can be stolen, moved around and even transferred from the dead to the newly born. As a result you can get an episode like this, in which characters meet the dead and you can pretty much take it on face value that this is exactly what they're doing. It's a strange and uncomfortable fit, one that blends both science fiction and fantasy together. No wonder they brought in Neil Gaiman.

This episode is essentially four conversations. Garibaldi (Jerry Doyle) gets to speak with Dodger, the marine with whom he had a one-night stand back in Season 2's "GROPOS". Lochley (Tracy Scoggins) gets to speak with Zoe, a drug addict with whom she lived when she was young. Lennier (Bill Mumy), who has come to the station specifically to experience the day of the dead, has a conversation with the spirit of Morden (Ed Wasser) - the agent of the Shadows who tormented Londo (Peter Jurasik) throughout the first three years of the show. Londo himself is reunited with his one true love Adira.

To be honest two of these plot threads - Londo and Garibaldi - feel like filler, neither significantly pushing forward their storylines nor particularly illuminating their characters. In Londo's case it provides him with a certain amount of emotional closure, but to be honest it wasn't closure that the character desperately needed. There's also an odd continuity glitch here - I assumed caused by episodes shuffling around in the broadcast schedule - where Londo and G'Kar are both on the station despite having already left to Centauri Prime in "Strange Relations".

Lochley's conversation with Zoe at least provides some back story to help flesh out her character. It turns out she was a teen runaway and a drug addict before cleaning up her act and joining Earth Force. It's nice for the character get fleshed out in this fashion, since she is constantly struggling with her role as a thinly-dran "replacement Ivanova". It's a deep pity this episode couldn't have been made with Claudia Christian still in the cast. A final conversation between Ivanova and Marcus probably would have been very satisfying.

Lennier's conversation with Morden is certainly the most striking of the four, but it's also the most difficult fit. Lennier had pretty much nothing to do with Morden for the entire time that character was alive - so much so that he actually has to ask who he is when he suddenly appears. Bizarrely the scenes mainly entail Lennier wilfully trying to ignore Morden while Morden patiently reads a newspaper, but they do sneak in some prophecies about Lennier's unrequited love for Delenn leading him to betray the Rangers. I guess we've got that to look forward to later in the season. I'm not buying Straczynski's re-positioning of Lennier as a traitor and a resentful spurned lover, but we shall wait and see how it develops.

One thing this foreshadowing does do is give Season 5 some badly-needed tension. With so much of the overall story arc resolved by the end of Season 4, this final year of the series has been floundering. Individual episodes are sometimes quite enjoyable, but the enormous emotional drive that pushed Seasons 3 and 4 forward with such momentum is pretty much gone. The best characters now spend most of their time acting as comic relief, and the new arcs - particularly Byron and his telepath community - simply aren't working. There's another bit of foreshadowing thrown it at the episode's end, in the form of a warning to Sheridan from Kosh, that helps to achieve the same aim as Morden's prediction. The horizon finally feels ominous again.

As for Sheridan (Bruce Boxleitner) himself, he spends the episode entertaining comedians Rebo and Zooty, played by real-life comic magicians Penn and Teller. It's never a great idea to undertake stunt casting like this, because it punctures the reality of the series and makes it difficult to take seriously. Early scenes of the duo performing to a crowd of station residents are also incredibly tedious to sit through, with Boxleitner in particular giving a bizarrely over-the-top laughing reaction to their not-particularly-funny schtick. There's one neat bit, which involves Minbari humour. That's about it.

This is an episode with mixed results, and it's told in a rather sedate fashion, but it's an interesting diversion and certainly feels better than the previous week's attempt. It leaves Season 5 with five good episodes out of eight so far, and a quality ratio of 63 per cent.
Posted by Grant at 7:31 AM