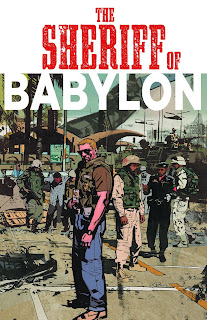 Tom King appears to be one of big new stars among DC's writers. Omega Men, while not a strong seller, has been very well received by the critics, and he's been put in charge of writing their big new Batman crossover "Robin War" - the first issue of which is reviewed below. He also has a new eight-part miniseries launching this week from DC Vertigo: Sheriff of Babylon. The comic is set in 2004 and follows three disparate characters - Christopher, Nassir and Sofia - in three separate incidents across Baghdad. All three involve someone being shot and murdered, and it seems very likely that all three are connected.

This is an impeccably written crime drama with a post-war setting. The narrative is beautifully structured, with deliberate echoes from one plot thread to the other. There is a beautiful sense of time and place to the comic, and realistic characters showing both variety and depth. It does precisely what a first issue is supposed to do: hook in the reader, introduce the characters, and set up the narrative. I'm not surprised King's name is popping up everywhere at the moment. He's enormously talented.

The artwork by Mitch Gerads is well suited, reminding me quite a lot of Garry Brown's excellent work on The Massive a year or so ago. It's realistic, nicely gritty, and coloured in a way that makes the whole book look sun-bleached.

People often argue that Vertigo is a dying imprint, with its best work behind it. I've probably been guilty of saying that myself. Books like this prove us all wrong. It's fantastic. (5/5)

Under the cut: reviews of Magic Whistle, Robin War and Star Wars.

Some years ago Sam Henderson's self-published humour comic Magic Whistle was a major influence on my own no-budget comic book efforts, so it's great to see it back in an all-new third edition - now backed up with a pile of other independent cartoonists. It's incredibly hit or miss stuff, but that's kind of the rule of thumb when it comes to independent anthology stuff. While Sam Henderson contributes his usual gloriously puerile material it's actually John Brodowski's series of one-page "Sid & Sid" strips that steals the show - odd, gloomy, and wonderfully funny. (3/5)

That's a lot of artists for a single superhero comic. This is the opening issue of "Robin War", a multi-part crossover jumping between Robin: Son of Batman, Grayson, We Are Robin and Gotham Academy. Despite the large number of artists, the issue moves along at a strong pace with a gripping set-up. The growing number of teen vigilantes taking on the Robin name is spinning out of control, and it's being manipulated behind the scenes by the Court of Owls. This feels like a great old school Batman crossover, yet Batman of course is nowhere to be seen - except for the Jim Gordon robot suit Batman, but that doesn't really seem to count. The only weird part is how this is essentially a crossover among Batman sidekicks, which is precisely what Batman & Robin Eternal is doing at the same time. (4/5)

Another company, another multi-part crossover. I don't usually buy Star Wars, having been perfectly satisfied reading Darth Vader and some of the spin-off miniseries. But here we are, at part 3 of "Vader Down", and like a dutiful and gullible reader I'm having to expand my pull list temporarily to follow the story. I really do hate this stuff, even when the comics are good. This issue is very, very good: Han Solo versus Dr Aphra, Chewbacca ripping off the arms of assassin droids and beating them with them, Leia leading the hunt for Darth Vader. It's the sort of crazy over-the-top fannish pornography for which these kinds of comic books were designed. (5/5)
Posted by Grant at 7:25 AM