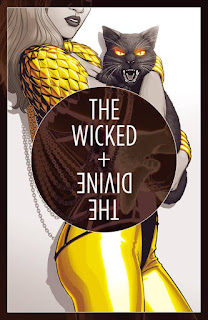 The Wicked + the Divine ends its third story arc this week. I'm still not entirely sure what I've thought of it. While regular artists Jamie McKelvie and Matt Wilson have been away producing art for Phonogram, a string of one-off guest artists have been illustrated Kieron Gillen's scripts - each one focusing on a different member of the Pantheon. This one focuses on the Egyptian goddess Sakhmet, and comes with artwork from Brandon Graham.

I'm not entirely certain how I feel about this particular arc. Without consistent art, and structured as a series of one-off character profiles, it has lacked the urgency and the clarity that marked earlier instalments. I've found myself less desperate to read each issue, and less impressed with each issue as I read it. It's still a good comic, but of late I'm not sure it's been a great comic.

Brandon Graham picks up the book's game a lot, but then he's one of my favourite comic artists. He has a nice loose style that really jumps out in comparison to the earlier issues. Sadly I'm just not feeling the energy I used to get with this comic's earlier arcs. Without an easily relatable human lead, it all feels a bit too distanced to be dramatically effective.

I'm still committed to The Wicked + the Divine, but it's up to the fourth arc - beginning in March - to keep me committed for the long-term. I really hope Gillen gets his groove back. (3/5)

Under the cut: reviews of Darth Vader and The Autumnlands.

Leoroyd and Dusty's journey continues through the wilderness, leading Leoroyd to a strange encounter with the first human he's seen since arriving in the Autumnlands and then both Leoroyd and Dusty into what looks like a border war between sheep people and goat people. This is a really intriguing issue, opening up multiple plot threads to be played out over the next few months. Busiek is a master comic writer, and he's at the top of his game on this book. Benjamin Dewey's art is also sensational, with a fine art style rarely seen in an American comic book. (5/5)

While "Vader Down" continues over in the regular Star Wars titles, this one-shot basically tells a self-contained story of Vader travelling to a mining planet to ensure its supply of minerals to the Empire continues. Moment to moment it's very well told, and nicely self-contained, and certainly showcases Vader at his best and most intimidating. The problem is that it feels a little too much like other issues we've read before. If you haven't been reading the monthly comic, this is probably an excellent one-shot to buy, read and enjoy. If you have been reading, this might feel to a little too familiar to be worth the bother. Leinil Yu and Gerry Alanguilan's artwork is excellent. (4/5)

IDW are back with another attempt at selling the very British icon Judge Dredd to an American audience. This time around they're actually taking the book in their own direction, rather than to simply emulate what 2000 AD has been doing for 40-odd years. This is a pretty entertaining Kamandi-inspired take on the character that's actually a decent change from the usual stuff. And that's good: the usual stuff is violent satire aimed at conservative Britain, which never translates that well for an American audience. This, on the other hand, doesn't feel like the British-style Dredd at all. It's intriguing. (3/5)
Posted by Grant at 9:26 PM