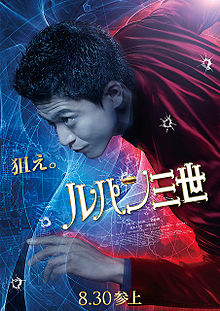 Lupin III is a Japanese action manga that premiered all the way back in 1968, and follows a gang of international thieves on adventures around the world - always one step ahead of a dogged Interpol detective trying to arrest them. It has always been a neat blend of over-the-top chases, action, international intrigue, and comedy. So successful was the manga - the creation of writer/artist Monkey Punch - that it soon spawned numerous anime spin-offs: TV shows, feature films and original animated videos (OAVs). There have even been two stage musicals.

Last year Ryuhei Kitamura (Azumi, Godzilla: Final Wars) directed an all-new live-action adaptation of the manga. It is the second live-action film, following an earlier attempt back in 1974, and attempts to update the characters and the storylines to a contemporary setting. Sadly it's only partially successful. While it is a fast-paced, colourful action film, there is something rather hollow on the inside. It gets the visual aesthetic of the manga nailed to perfection, but somehow never quite nails the energy and joie de vivre of either the manga or its numerous animated counterparts.

Shun Ogiri stars as the titular Lupin. He is reteamed here with his Azumi director, and delivers a fairly lively performance. With his youthful features, however, he feels just a little bit too young and fresh to fully convince as the world's greatest thief. Much more appropriately cast is Tadanobu Asamo as the obsessive, constantly dishevelled police detective Koichi Zenagata, who has made it his life's mission to put Lupin behind bars. When the two share scenes it pretty much marks the film at its height. The remainder of the lead cast - Meisa Kuroki as Fujiko, Tetsuji Tamayama as Daisuke, and Go Ayano as Goemon - all acquit themselves reasonably well, but all seem partially humstrung by the film's screenplay.

Put simply, the screenplay is not very good. Rather than concentrate on a breezy, non-step series of action episodes the film attempts to give Lupin's adventures a personal stake and an emotional grounding. Early scenes see him work as a member of an international thief's syndicate before suffering a violent betrayal and the loss of a clichéd father figure. This attempt to give Lupin a deeper motivation and a tragic element backfire: they pull the characters away from their strengths and towards a sort of generic Hollywood take that is increasingly popular among Japanese film studios. Like many of its peers, Lupin the Third winds up straddling a line between being a solid manga adaptation and being a mid-range Hollywood action flick. It ultimately fails to manage at being either.

The script also seems riddled with plot holes and weirdly unbelievable set pieces. One of them - a top secret trade of stolen goods in front of a live studio audience - beggars belief. Others, like a lingerie-clad fist-fight between the film's only two prominent female characters, inspires eye-rolling more than disbelief.

This all brings into question whether or not a live-action take on such an energetic anime character is actually a good idea. There's likely never going to be a motion picture take on Lupin III that lives up to the hectic entertainment of the source material. Kitamura can be applauded for trying, but his attempt is a lot more frustrating than it is entertaining.
Posted by Grant at 10:37 AM