Picking the next Doctor Who companion 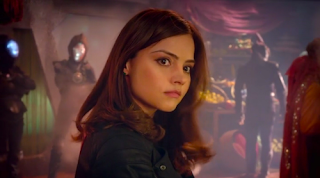 Season 10 of Doctor Who is going into production at some point in 2016 - we really don't know any more details at the moment - and that means someone is going to need to replace the recently departed Clara Oswald (Jenna Coleman) as the Doctor's trusty companion. Obviously there's no way of knowing who the character may be, or what actor will play them. It's also most likely going to be an entirely new character created specifically to fill the vacancy.

But what if it isn't? After all, Donna Noble (Catherine Tate) made her debut in the 2006 Christmas special before unexpectedly returning to become a permanent companion in 2008. There are plenty of former guest stars who could be brought back to the series and transformed into the new companion. Here are a few potential choices.

Over the course of three guest appearances Ingrid Oliver's geeky, Doctor-cosplaying UNIT scientist has developed and grown into an interesting character. Oliver's demonstrated her ability to play both comedy and drama, and already has a pretty firmly established and enthusiastic fan base. The Doctor has already offered her the chance to travel in the TARDIS twice. Plus there's two of her: imagine the story possibilities of two identical companions, one of whom can change her shape? On the other hand by the end of "The Zygon Inversion" both the human and the Zygon Osgood seemed pretty firmly nailed down to a life on Earth protecting the UNIT/Zygon peace accords. It's difficult to imagine one of her abandoning that responsibility.

Emma Grayling only appeared in a single episode - Neil Cross' haunted house adventure "Hide" - but she made a tremendous impact on me at the time. Smart, sensible and inquisitive, with the added bonus of having psychic powers. It'd be nice to have a companion with a different angle than the usual contemporary English young woman. Grayling stands out from the crowd in two ways: firstly, the psychic stuff, and secondly, she's from the 1970s. It's about time we had another historical companion. Of course it might be tricky to nail down Jessica Raine for a whole season - it was only recently that she quit her popular BBC drama Call the Midwife, so she might not be keen to do another series so quickly.

Courtney Woods, high school trouble maker and future United States President, could make for an interesting companion. There are upsides: she'd make a nice break from the near-endless string of white people who seem to populate the TARDIS, and has nice aggressive attitude towards anything that stands in her way. It also wouldn't be the first time the Doctor's travelled around the universe with a teenager in tow. She could be this generation's Ace, only with more believable slang and teen rebellion. Of course travelling around the galaxy with a high schooler worked okay in 1987, but it might look a little suspect in a post-Yewtree BBC broadcast. It worked in "Kill the Moon" because she was accompanied by Clara - would it work if she travelled with the Doctor on her own?

Seriously: who better to travel with the Doctor than his own wife? We know from BBC publicity that River Song is returning to the series in this year's Christmas special, so why not keep her in the TARDIS full-time for a year? Alex Kingson seems a much better match, age-wise, to Peter Capaldi than a lot of other potential choices, and it would seem an excellent opportunity to re-live the sort of "glory days" style of Tom Baker's Doctor opposite Romana (Mary Tamm and Lalla Ward). This would probably be a contentious choice: for every fan keen to see River return there's at least one keen to see her never return again. Personally I'm all for it, and have my fingers crossed.

Oh go on. You know it has to be a possibility. Clara, the "impossible girl" who just keeps almost leaving. She died in her first and second appearances, then seemed to leave again at the end of "Death in Heaven", before seeming to leave again in "Last Christmas", before seeming to die in "Face the Raven". We'll find out this weekend for sure, but I'm pretty convinced the character is going to live on in some fashion by the end of Season 9. At this point I simply don't trust Steven Moffat and Jenna Coleman to not do an 11th hour about-face and bring her back once again to.

When Catherine Tate debuted as Donna Noble, the majority of fans seemed to really hate her. By the time she left the TARDIS in "Journey's End", she was widely considered one of the best companions of all time. She was written out in a horrible way, with the Doctor ripping out her memories of their time together specifically against her consent and leaving her behind on Earth to live a normal life. It felt so antithetical to the very nature of the Doctor to leave her that way. Even now, six years later, it feels like a major piece of unfinished business - practically an open wound. How wonderful would it be for the Doctor to come back, repair Donna's mind, and for them to both take a quick year-long jaunt around the universe for old time's sake? Imagine the sparks between Donna and Capaldi's Doctor. Donna deserves it. Her fans deserve it. The Doctor deserves it. I wonder if Tate would be up for it?
Posted by Grant at 5:08 PM