Doctor Who: "The Husbands of River Song" 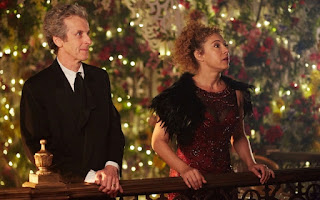 I am genuinely not sure what I should make of "The Husbands of River Song". It is Doctor Who's 2015 Christmas special, finally reuniting the Doctor (Peter Capaldi) with long-running associate - and wife - Professor River Song (Alex Kingston). It's the first encounter between River and Capaldi's Doctor, which makes the episode feel as if it should be something of an event. It is also a Christmas special, most of which since 2005 have been lower-then-average quality, more often than not rather silly, and occasionally quite irksome in their 'don't question the details, just have fun' tone.

In the end the episode basically does both things at once. There is some beautiful interplay between the Doctor and River that is sometimes funny and sometimes sad, and often perfectly observed. These moments are wedged in between several scenes of eye-rolling tedium, and jokes that fall flat on their face more often than they elicit a smile. It is like two episodes that you have to view simultaneously. One is wonderful and one is really not worth the audience's time. What is a viewer to do?

The bulk of the episode is generally very silly: River Song has married a psychotic alien king named Hydroflax who has an immensely valuable diamond embedded inside his head. She is trying to steal the diamond, which means kidnapping and ultimately murdering Hydroflax's head. Once she has run away with it - and the Doctor tailing along with her - Hydroflax's headless robot body picks up the chase from a snowy 54th century colony to a starship full of genocidal maniacs.

It is all tremendously over-acted, with a cast boasting several comedians and not a lot of depth or intelligence. Matt Lucas, formerly of Little Britain, is particularly tiresome to watch. He only seems to have one kind of character when he acts, and it's not a particularly enjoyable one. The episode overall is regularly eye-rollingly stupid, and more than once it is a chore to sit through. Composer Murray Gold, whose music in 2015 managed to really pick up its game and provide some beautiful emotional backing to Season 9, reverts to type here, composing a loud, abrasive score that pretty much ruins most attempts at humour in the script. It underlines rather than accentuates, and overwhelms rather than supports. I had really hoped he had moved beyond this sort of ridiculous cacophony, but what we get here is the sort of score previously reserved for the silliest David Tennant episodes. It is not a welcome return.

As if often the case with these Christmas romps there are some rather neat ideas, like a tourist cruise of super-villains, but as always the ideas are introduced and then abandoned. It all rushes along much too quickly. There is no time to engage with a setting, the storyline, or even individual characters. It is all much too superficial.

So why watch this at all? Basically it's all down to the Doctor and River. After a pretty gruelling experience in recent episodes, he is delighted to see her. She does not recognise him at all, having assumed he died with his last incarnation. For much of the episode he runs around trying to drop larger and larger hints as to his identity, and she continues to fail to recognise him. Much of the episode is awful, but the interplay between the two leads is remarkable. Capaldi in particular does some impeccable comedic work.

This all builds up to a prolonged epilogue that takes things more seriously, and neatly wraps up River's story for good. She only has one more place left to go, and we saw that all the way back in 2008. It's rather delightful to see Steven Moffat bring the character full circle like this, and the final few minutes at least seem a wonderful send-off. It is just a pity that the first half of the episode was such a chore.
Posted by Grant at 5:06 PM