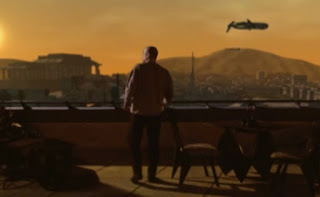 Continued attacks upon Alliance freighters lead Garibaldi (Jerry Doyle) on a mission to the Drazi home world. G'Kar (Andreas Katsulas) returns to the station and finds he has become a religious icon to the Narn people.

With the telepath arc seemingly concluded, attention turns back to the growing threat of Alliance freighters being massacred along the borders from one government to the next. As viewers we are in a privileged position: we know the attacks are being undertaken from Centauri Prime in secret, at the behest of the Drakh that are hiding there. As a result there's just a little bit of tension taken away from Garibaldi's investigation, since we basically spend an episode waiting for him to catch up.

Garibaldi is dealing with a larger problem than whether or not the Drazi are involved in the raids. As a result of Bester's torture he has slipped off the wagon and succumbed to his alcoholism. He gets blind drunk while on his mission, and winds up getting people killed as a result. It is a subplot that doesn't quite convince me, but at the same time I worry I'm judging it too harshly. I am not an alcoholic, and I do not know what it is like to be one. As a result, what seems to me like a weirdly accelerated plot thread - he only started drinking again one episode ago - may be more realistic than I think. It does still seem rather stereotypical, however, and could have done with a more complex and thoughtful take.

I am also not sure if this episode actually progresses anything very far. We knew going in that Garibaldi had a drinking problem, and and all we really gained was Garibaldi and Sheridan (Bruce Boxleitner) discovering evidence that the Centauri might be involved. That's not a lot of movement for an entire episode.

Back on the station G'Kar discovers that the journal he had been writing has been stolen by his own people, and has become a major bestseller back home. He is now a revered religious and spiritual figure to many of his kind - many of whom now wait outside his quarters in the hopes of meeting him. It is a logical progression, and a welcome one, continuing the transformation of G'Kar from the arrogant and deceptive warmonger of Season 1 to the man of peace he has become. It's a little slight, but it's still welcome - and of course it has been gradually building since he started writing his book two seasons earlier.

In a small subplot Dr Franklin (Richard Biggs) is offered the chance to replace Dr Benjamin Kyle as the head of xenobiological research at Earthdome. It's a neat little thread, since it begins to set up Franklin's departure well in advance of the series ending in about 10 episodes. It's also a nice little namecheck for Dr Kyle, the chief medical officer of Babylon 5 all the way back in "The Gathering".

While the two subplots are entertaining enough, the real meat of the episode is a real let-down. Considered altogether this is a very weak episode. It leaves Season 5 with six good episodes out of 12, and a quality ratio of just 50 per cent.
Posted by Grant at 10:39 AM