Star Trek: The Next Generation: "The Drumhead" 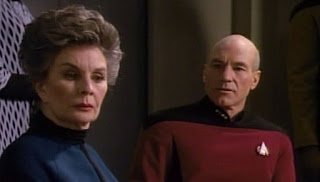 When a Klingon scientist is caught selling the Enterprise's schematics to the Romulan Empire, and the ship's warp drive appears to have been sabotaged, an investigation is immediately launched to root out any traitors or collaborators. Retired Admiral Norah Satie (Jean Simmons) is assigned to lead the investigation, but soon Captain Picard (Patrick Stewart) finds himself questioning her methods.

"The Drumhead" is a bottle show, where a production saves money already pegged for more expensive episodes by shooting with a small guest cast on pre-existing sets. They're fairly easy to spot in Star Trek: they're the ones set entirely on the Enterprise with no away missions, and by and large scenes in one room of people talking. They can be awful, particularly when they're made as the dreaded clips show (see "Shades of Gray" in Season 2), but they can also be remarkable. Thankfully "The Drumhead" is one of the best ones.

The episode is basically an allegory of McCarthyism, with Admiral Satie's initial investigation slowly expanding its scope from one Klingon and a potential saboteur into a ship-wide inquisition to root out anybody working against the Federation's interests. What makes the episode work is how smoothly the descent from authentic investigation to paranoid witch hunt is undertaken. It's achieved in a couple of ways. For one thing, Satie initially seems quite reasonable and pleasant. She's an elderly, smiling woman, full of stories and exuding an almost-stereotypical old wisdom. Jean Simmons plays the part beautifully, which is hardly a surprise; at the time this episode was produced she was a veritable screen legend and easily one of the highest-profile guest stars Star Trek had or would ever manage. As the episode goes on, so Satie grows gradually sharper and harder. It happens gradually at first, and it's easy to go along with her investigations because the episode seems like there really is a conspiracy onboard the Enterprise.

The other way the episode tricks us into initially siding with the McCarthyists is by putting Worf temporarily onto Satie's team. It's a logical move, since he's the Enterprise's security chief, and a Romulan plot ties into Worf's ongoing character arc very well.

Then it is revealed that the apparent sabotage was really just a freak accident. There is no conspiracy on the Enterprise - just a Klingon exchange officer selling secrets to the Romulans. At that point though, the interrogations have already begun. The rumours are spreading. A junior medical officer is discovered to have hidden his Romulan heritage on his Starfleet entrance documents. When Picard finally steps in to end the charade at the episode's third act, he becomes the target of Satie's investigation and is compelled to take the stand and be interrogated himself.

There is a pretty foolproof rule for making a quality episode of Star Trek: The Next Generation, and that is to put Patrick Stewart and a quality guest actor into a room together and have them argue with one another. It's precisely what happens here, with Stewart and Simmons trading back and forth until one of them finally has a victory. It is very simple and very effective drama, and it doesn't even require spaceships, or away missions, or a surfeit of bumpy-headed aliens. It's simply good drama.

15 good episodes out of 21 gives Season 4 a quality ratio of 71 per cent. It seems that season by season The Next Generation just keeps getting better.
Posted by Grant at 11:50 AM