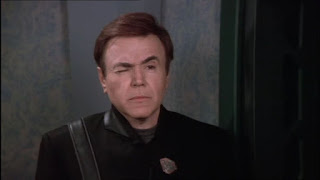 The ongoing crisis on the station reaches a critical phase, as several telepaths take hostages in Medlab and Bester (Walter Koenig) decides to take matters into his own hands.

This is a really frustrating episode of Babylon 5. It frustrates because half of the episode is absolutely brilliant and well-performed, with strong character work and great dialogue, and half is teeth-grindingly awful with bad dialogue, poorly thought-out motivations and a nonsensical climax. I'm not sure anything or anyone could have saved the episode's dreadful and melodramatic ending, but to his credit Walter Koenig does his best. With Andreas Katsulas and Peter Jurasik consigned to comic relief duty for much of the season so far, it's really been down to Koenig to provide a quality performance and keep the series somewhat enjoyable.

To an extent this really is Bester's episode. A past connection with Byron (Robin Atkin Downes) is revealed, giving him a personal stake in overthrowing Byron's revolution that we previously did not have. He has another conversation with Garibaldi, who's still desperate to murder him after what he did to Garibaldi's mind, but fundamentally incapable of doing so thanks to Bester's psychological tortures. He gets a couple of nice confrontations with both Sheridan (Bruce Boxleitner) and Lochley (Tracy Scoggins) over how to handle the crisis and who has authority to end it. Most of all it's his episode because we actually get to see a three-dimensional, nicely rounded portrayal of his character. Sure, he's a monster, but importantly he is a monster that believes he is the hero. He visibly loves the Psicorps. While he's not going to hesitate to brutally stamp out Byron's rebellion, he also wants to recapture the telepaths and have them 're-educated' back at the Corps. When events turn out badly, he seems genuinely mystified as to why so many people who choose to die than to return to the Psicorps.

Other characters are not as well served. Garibaldi does get some development - and a return to alcoholism - but he's been featured so sporadically this season that I actually found it difficult to re-engage with his character so long after Bester tortured him. It feels as if the series has actually taken too long to return to this confrontation, and does too much that is stereotypical when it does. I do like Bester's re-working of Asimov's laws of robotics, but only to an extent - much like the telepaths' use of the word 'mundane' to describe non-telepathic humans and Bester's name, it all feels a bit too much like Straczynski the science fiction fan peeking from behind the curtains and waving at his fellow fans.

The hostage crisis in Medlab ties in to "The Deconstruction of Falling Stars", the Season 4 epilogue that showed the scene without context. There was a lot of time spent prior to this telepath arc about the coming 'telepath war' - if this was the war, it was a pretty small and disappointing one. As with Garibaldi's frustration and failure to stay sober, the hostage crisis plays out via every cliché in the book.

Up until its last 10 minutes. "Phoenix Rising" is an average episode boosted by some great work with Bester. The climax pretty much undoes every bit of goodwill the Bester scenes have gained. Byron agrees to surrender to the Earth Alliance along with every follower who has taken hostages or shot station personnel, but only if they are not handed over to the Psicorps. First of all I have no idea how that even works, given that the Corps is a legitimate part of Earth's government with assigned authority over all telepaths. Clearly Bester agrees, since he and his officers immediately storm the handover to arrest and detain Byron personally. There's a shoot-out, a leak of flammable chemicals, and for no discernable reason whatsoever Byron and his closest followers commit suicide by hugging together while Byron ignites the chemicals.

Byron does give Lyta an explanation before he does it, but it's a nonsensical explanation that's basically poetic-sounding words without any logic behind them. Rather politely, every armed guard and soldier in the room patiently wait for Byron to give his monologue without trying to shoot, stun or otherwise apprehend him. In death, Byron ultimately goes out pretty much the way he lived - a repellent sort of charismatic cult leader, inexplicably presented to the audience as a likeable hero. The episode even ends with him as some sort of inspirational marytr, with "remember Byron" as a galaxy-wide rallying cry for rogue telepaths. It's not something that's been earned. It doesn't make logical sense. On the one hand I'm glad that Byron is gone. He was dreadfully written and poorly performed. On the other hand even in death he's irritating, and pretty much ruins the episode.

Thanks to Bester, this episode is almost good. Thanks to Byron, that potential gets slapped down by the end. 11 episodes in, and six have been at least reasonably good. The quality ratio drops to 55 per cent.
Posted by Grant at 9:38 AM