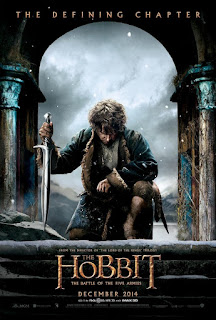 Now that Peter Jackson's bloated, self-indulgent and thoroughly messy Hobbit trilogy has been and gone, it is genuinely difficult to look back and ascertain precisely how things managed to get this far out of control. It beggars belief. How can the writer/director who successfully adapted The Lord of the Rings, a lengthy and complex novel widely considered unfilmable, do such a terrible job adapting The Hobbit, a significantly shorter and rather simple adventure story? How did this project get warped so wildly out of all proportion? The Battle of Five Armies, the final instalment of this Hobbit trilogy of films, is the worst of the three. It's also the worst sort of bad movie - the one where you look at the talent involved, remember their earlier successes in filmmaking, and simply fail to work out how it all went so terribly, embarrassingly wrong.

I'm not throwing these words around lightly, and honestly do wish this was a great film. I adore The Hobbit. It is a childhood favourite. It has the potential to form a delightful three-hour fantasy film, and Peter Jackson is demonstrably capable of making it. He didn't. Since the final release of The Battle of Five Armies: Extended Edition (a mind-boggling concept, given this film's theatrical release takes 144 minutes to adapt about 45 pages) Jackson has gone on the record admitting that he simply made much of this third and final film up. He improvised on set, threw together the lengthy battle sequences and ultimately had to delay it's release by about six months just to get the thing completed.

Do I have sympathy for Jackson, who only signed up to make The Hobbit when Guillermo Del Toro jumped out of the director's chair? Of course I do. Nobody wants to make a bad movie. At the same time I'm unable to sugar-coat it: Jackson didn't just make a bad movie, he made three.

To begin with the film's narrative structure is bent horribly out of shape, consisting of a brief opening sequence of the dragon Smaug attacking Laketown and getting killed by Bard the Bowman (Luke Evans, acting for all the world like he's in a better film than the rest of the cast). From there newly enthroned dwarf King Thorin (Richard Armitage) goes a bit bad, and several armies arrive at the Lonely Mountain to claim its treasure. Aside from a mercifully brief series of epilogues the rest of the film consists of a series of increasingly improbable and largely computer-generated action sequences. Characters die, but it's genuinely hard to care because we were never given a proper chance to engage with them in the first place. It is not even particularly well shot; a surprise given the talents of cinematographer Andrew Lesnie. Then again, given the slapped-together fashion in which the film was made he was probably just doing the best he could on the spur of the moment.

To be honest I think we could have easily seen this film coming. For me, Peter Jackson peaked with The Fellowship of the Ring, which remains an extraordinary film. Its sequel, The Two Towers, is a remarkably strong follow-up, but suffered a little from not really having a beginning or end and from a surfeit of computer-generated visual effects. The comparative realism of the first film started to slip away. That downward trend continued with The Return of the King, which went full-bore with the computer-generated effects, making much of the film feel more akin to a video game than a feature film. It also threw in some weirdly illogical plot choices - Aragorn leading an army all the way to the gates of Mordor being one obvious misstep - and probably the longest denouement in cinema history. Despite its self-indulgence and bloat, The Return of the King did manage to maintain a great emotional impact. I do think it's the worst of the Lord of the Rings movies, but it's clearly still a remarkably good film.

Those two flaws, however: self-indulgence and bloat. They followed Jackson over to his 2005 remake of King Kong, which managed to achieve in 191 minutes what took its original directors Cooper and Shoedsack about 100. They followed him over into The Lovely Bones, his 2009 muddled and disappointing supernatural drama. They absolutely hit their peak with The Hobbit: imagined by Del Toro as two films but expanded by Jackson into three, packed with computer-generated effects, digital sets and characters, and lengthy additions to the original novel. Taken altogether, they're a warning sign against directorial self-indulgence.

I remember reading an article once about how books by popular authors tend to get longer and longer. It goes something like this: in their early books, there's an editor who will aggressively cut back and slice away unnecessary material, and make those books tightly structured smash hits. Then, as they start to accumulate blockbuster successes, the editors begin to get a little gun-shy. The authors become a little more defensive about edits. Once the author's become a household name - a Stephen King, or a J.K Rowling, or a Tom Clancy - their books generally aren't get edited much at all. After all if one book is a smash hit but the next is a failure, who is going to be blamed? The author, or the proactive editor who cut 100 pages from the second book?

I think that phenomenon is true of filmmakers as well. Who, after three Lord of the Rings films, 17 Academy Awards, and almost three billion dollars in revenue, is going to question Peter Jackson's creative choices? We've seen this phenomenon before in film, about a decade earlier, with another hugely successful filmmaker attempting to duplicate the success of his blockbuster trilogy with three CGI-soaked sequels. To be honest the prequel trilogy did not turn out too well then either.

So sure: I have sympathy for Peter Jackson, who probably hates the mess he made of The Hobbit more than anybody. More than that, I desperately wish there was someone in Wingnut Films, or MGM, or New Line Cinema, who was brave enough to put their hand up and tell Jackson that he was making some terrible mistakes.
Posted by Grant at 9:40 AM