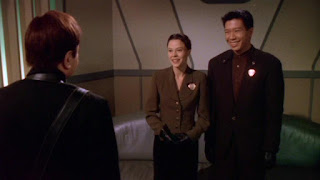 PsiCop Alfred Bester (Walter Koenig) is dispatched once more to Babylon 5 to apprehend a runaway telepath - this time with two rookies along for the ride. Do they have what it takes to properly serve the PsiCorps?

With the bulk of Babylon 5's story arcs wrapped up, there is the opportunity in Season 5 to relax a little and undertake a few experiments in story and creative style. Already the season has given viewers the janitor's eye view of proceedings in "A View from the Gallery", and explored conversations with the dead in "Day of the Dead". Now it tries what turns out to be the most effective experiment of the bunch: an entire episode told from the point of view of Bester and the PsiCorps.

Out of the entire cast - both ongoing and supporting - of Babylon 5, I think Alfred Bester ranks about third, after Londo and G'Kar. He works as well as he does for a number of reasons, and they're all openly on display in this episode. First of all, Walter Koenig really relishes playing the part. There is an enthusiasm and an energy to the character that makes you pay attention the moment he enters a scene. Secondly, he's a villain - and who doesn't like villains? Third, he's a villain who visibly believes he is the hero. He doesn't do things because he wants to laugh maniacally and gloat over his enemies: he does them because he believes in the ideals of the PsiCorps and he believes telepaths to be superior to 'mundanes' (a derogatory terms for non-telepaths). Fourth, he has proper depth. Five years of guest appearances have given him facets, contradictions and nuance. In a series regularly filled with awkwardly stilted and two-dimensional characters, Bester regularly feels like a breath of fresh air.

We are on his territory in the episode too. We get to see inside the PsiCorps - an unsettling mix of Orwell-esque propaganda and relaxed friendliness. We see the enthused faces of young trainees as they set off on careers to make the world a better place. We also see regular glimpses of just how horrifying the PsiCorps actually is: they are training telepathic assassins, and keep entire starships hidden in hyperspace in preparation for a forthcoming - and largely unmentioned - war. Just in case the audience gets put too far off side by all of the darker elements within the Corps, we also get a glimpse of non-telepath bigotry towards the Corps members. Security chief Zack Allen (Jeff Conaway), who is usually represented as an easygoing and likeable person, comes across here as actively xenophobic, comparing Bester to a Nazi while simultaneously making light of the deaths of telepaths. It's a provocative depiction that is very worthwhile.

As a one-off inversion of the series formula, "The Corps is Mother, the Corps is Father" is a wonderful success. It's dramatic, funny, disturbing and just the sort of creative jolt that Season 5 has been seeking. 13 episodes in, and Season 5 has had seven good episodes. That's a quality ratio of 54 per cent. Sadly this is Bester's final on-screen appearance. He was slated to appear in a late Season 1 episode of the Babylon 5 spin-off Crusade, but the series was axed before the episode went into production.
Posted by Grant at 5:01 PM