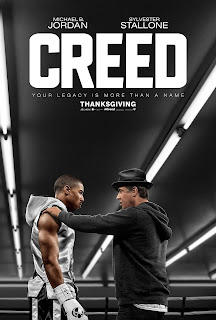 Halfway through Ryan Coogler's new film Creed there's a scene of a boxing match. The two boxers tap gloves, the bell rings, and they begin to warily circle one another. They start to get in some hits, back and forth. Blood is drawn. Tempers rise. The bell rings, and the boxers go back to their corners to recover and listen to their trainers. They head back out again, punching each other with a fierce brutality.

Somewhere into this scene it becomes apparent that the camera angle hasn't changed. The camera moves fluidly around the ring, from mid-shot to close-up, highlighting the fight, the characters' reactions, the audience and so on, but it's all in a single take. These fighters are getting beaten-up and bruised. There's blood on their faces. That one complex tracking shot just keeps going and going.

The impressive part of the scene is not the technical achievement, although it's worth noting that it was achieved in a single take without editing tricks and with a roving make-up crew diving into the ring and applying the blood to each fighter when the camera was pointed in another direction. The impressive part is just how immersive and emotionally effective these sorts of camera techniques make the fight. I don't think I've seen a better realisation of a boxing match in a film before, and that includes Scorsese's legendary Raging Bull or any of Avildsen and Stallone's six Rocky films. That second comparison is the key one, because of course Creed is a sequel to those Rocky films. It's an enormously welcome and pitch-perfect continuation of one of Hollywood's best movie franchises.

Adonis Johnson (Michael B. Jordan) works as a financial planner during the day, and as an illegal boxer in Tijuana by night. He's haunted by the memory of his late father, the world heavyweight boxing champion Apollo Creed. When his father's former gym refuses to let him train, Adonis - who goes by the name Donnie - quits his job, travels to Philadelphia and begs for help from his father's most famous opponent: Rocky Balboa (Sylvester Stallone).

This is the best kind of movie sequel. It's the kind that doesn't exist to cash in on a popular brand name, or to simply make a studio money. It's a sequel that came about because writer/director Ryan Coogler saw a fresh story buried inside Stallone's Rocky movies and went straight to Stallone himself to beg for a chance to tell it. It does what the best sequels do: bring back the elements that made audiences love the original film, then draw in a whole new suite of elements to make things fresh and original, and to push the story forward. Creed does all of these things in a pitch-perfect fashion. If you ever enjoyed a Rocky film - and I honestly don't know how to help you if you didn't - Creed is an absolute must-see.

The story is beautifully crafted to both echo Rocky and step out from its shadow. Donnie is a very different boxer to Rocky. He comes from a combination of a rough childhood and a privileged adulthood. The very thing that could make his life easier - his Creed legacy - is the very thing he doesn't want to rely upon. He finds himself in a similar situation to Rocky in the original film though: an unexpected chance to fight a world champion, and to prove himself. This very strong symmetry with Rocky makes Creed a very familiar, comfortable sort of a film. It's similar enough to feel like it's a continuation of the same story. It's distinctive enough to feel like its own movie. Michael B. Jordan plays the role brilliantly. He takes the varied emotional layers of the character as written and brings it to life. Jordan has been gaining positive buzz about his performances for a few years now. If there's any justice Creed is going to knock his career into the stratosphere.

Tessa Thompson is also very strong as Bianca, the partially deaf singer and musician with whom Donnie shares a romance. She has a grounded, realistic quality. Her developing deafness adds colour to her character, and provides one of the single-most effective moments in the film, but it doesn't ultimately form any significant aspect of the plot. I suspect it may play heavily in any potential sequels. The romance is, like the entire movie, sensitively and naturalistically played. This is a very grounded film. Nothing wildly unbelievable happens. People talk like real people tend to talk.

For most viewers coming into the film, the real draw card will be Sylvester Stallone's return as ageing ex-boxer Rocky Balboa. We've been following his life for 39 years now, which must make this one of the most sustained portrayals of a movie character ever. It has always been Stallone's best role, and he's always managed to bring the best of his talents to it. That's no surprise: in many respects Stallone is Rocky. He wrote the original screenplay because nobody would give him a break. He filled that screenplay with his own frustrations and resentment, and refused to sell it without a guarantee he could play the part too. Now he's back, and notably for the first time he's acting out somebody else's screenplay.

It's a masterful performance. Perhaps it's because he's not writing and directing this time, but there are emotional depths that Stallone dives into that are simply remarkable. He honestly gives a better performance in one facial expression than some actors manage in their entire careers. In one expression in particular he as good as guarantees himself a Best Supporting Actor award next March.

Ryan Coogler and Aaron Covington's screenplay puts Rocky in the perfect place as well. He's nearing 70 years old. His wife Adrian has been dead some years. We soon learn his best friend Paulie has passed away too. His son has moved to Canada. He may still have his restaurant, but he's a lonely old man now waiting for his life to end. Meeting Donnie gives him something new to care about. It's a canny move in both character and narrative terms to re-position Rocky from being the fighter to being the trainer. He's now Mickey (the late, much missed Burgess Meredith) to Donnie's Rocky. It fits him perfectly. It transforms Creed from being just another sequel to being a superb re-invigoration.

Rocky really is the film's strongest asset. When he steps on-screen it's in such a matter-of-fact, ordinary fashion, because he doesn't need a portentous entrance. Just by turning up he brings six feature films trailing behind him. When the film's events lead him to face a particularly harrowing challenge, we feel it so much harder because we've known the character for so long. I cried. I wasn't completely free from tears until the closing credits were rolling. This is an extraordinarily effective film.

Technically the film is superb. It is creatively shot and edited, perfectly paced and structured, and regularly shows flashes of innovation. Boxers appear on screen along with their performance record: nicknames, number of victories, and their league rankings. The bulk of the film's climactic bout is narrated by HBO sports announcers. The film switches from long hand-held takes to static shots and back. It uses slow motion at the best possible times. It replicates the classic Rocky montages with aplomb.

In 2006 Rocky Balboa presented a wonderful capstone to the series, rounding off the character in a definitive way and closing the door on the story in the most fitting way imaginable. Creed is a surprise: it's an immensely talented young film-maker yanking the door back open and showing that the story simply isn't done. Roll on Creed II: this new character is a keeper.
Posted by Grant at 5:07 PM