Survivors: "Gone to the Angels" 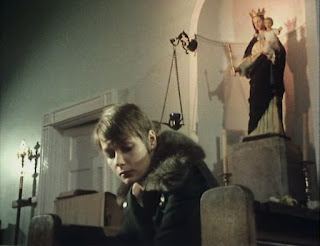 Abby (Carolyn Seymour) wants to re-visit her missing son's school, to see if any boys have returned. On the way she, Jenny (Lucy Fleming) and Greg (Ian McCullough) find two orphaned children - Lizzie and John - as well as a paranoid, anxious man named Lincoln (Peter Miles). They also hear word of a group of Christian hermits nearby known as 'the Angels', and wonder if they might have seen or met Abby's son.

Things do not get any cheerier in this fifth episode of Survivors. Within minutes the episode has led to a pair of children sharing a house with the corpse of one of their grandmothers, and soon after a terrified Lincoln stumbles upon Greg and shoots him in the arm. By the time Abby leaves Jenny and Greg to go visit the Angels there is already a pall hanging over the episode - what dreadful thing is inevitably going to happen when she gets there?

I really enjoy the approach this series is taking. Society has collapsed, but for once it really feels as if society really has collapsed. Not in an overwhelming 'everyone-for-themselves' Mad Max fashion either, but in a typically British quiet manner. Everything has simply slid weakly into disorder and decay. We hear word of Arthur Wormley's attempts to set up a totalitarian government, although we see neither him or his men. They have, however, absolutely terrified the jittery Lincoln, a former barber now panicking abut how to fortify his house and keep the looters away. It's a great performance by Peter Miles, managing to be both pathetic and deeply creepy, and certainly it's a long way from his most famous role as Nyder in Doctor Who's "Genesis of the Daleks". His story ends like I suspect most would if this sort of societal collapse really occurred, with a man being left behind to fend for himself.

Lizzie and John, the two children who meet the regular cast, are also rather creepy, although it's difficult to tell at first whether this is because of the acting involved - they're only juveniles and not very experienced - or if they're being written that way. John's calm, relaxed explanation to one dying man that he has the plague and is going to be dead soon, is both eerie and disturbing. Thanks to the blunt, depressing tone of the series to date I found myself spending half the episode wondering how Lizzue and John were going to die. I was quite surprised to see them both survive the hour and drive off with Abby, Greg and Jenny at the end. I suppose our team is now up to five, plus a rather placid-looking dog.

About two-thirds of the way through the episode Abby climbs the hill to visit the elusive "Angels". They turn out to be three rather pleasant, thoughtful men - played by Frederick Hall, Nickolas Grace (later to co-star in Robin of Sherwood) and Kenneth Caswell. They welcome her, discuss the plague that has decimated Britain, and even try to convert the atheist Abby to Christianity. Like Lincoln in the episode's first section they seem utterly believable. When it becomes clear that Abby, who contracted and survived the plague, has now passed it on to the Angels, there is a feeling of both tragedy and inevitability. These three devout men, who climbed the hill because they believed God had told them to, now die in their beds in a hollow, Godless universe. This series really is the most depressing thing I've ever seen from the BBC; excluding Christmas episodes of EastEnders, that is.

Another good episode. This makes it five out of five so far.
Posted by Grant at 7:51 AM