Babylon 5: "Whatever Happened to Mr Garibaldi?" 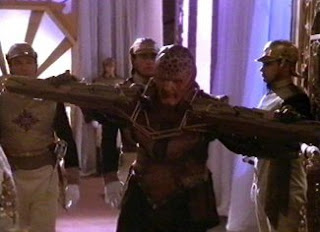 Captain Sheridan (Bruce Boxleitner) remains lost somewhere beneath Z'ha'dum. Back on the station Ambassador Delenn (Mira Furlan) struggles to move on without him. G'Kar (Andreas Katsulas) sets off on his mission to find the whereabouts of Michael Garibaldi - with Marcus Cole (Jason Carter) by his side, and with disastrous results.

The serialisation effect of Babylon 5 is in full force with this episode. It's not in any real fashion self-contained. It doesn't introduce any significant new plot threads, and it certainly doesn't close any off. It simply keeps things developing for 40 minutes, chaining the story from "The Hour of the Wolf" to "The Summoning" the following week. That's a difficult act for any TV episode to achieve. The middle part of a trilogy is always difficult, since you lack both beginnings and endings, and have to find something dramatic and engaging to do with a handful of middles.

It's interesting just how similar to "The Hour of the Wolf" this episode is. Generally speaking it divides quite sharply into parts that work - chiefly G'Kar's mission - and parts that do not - chiefly Sheridan's experiences on Z'ha'dum. There doesn't seem to be a middle ground: scenes in this episode are either powerful and effective, or tedious in the extreme.

G'Kar's mission is well paced and well shot. The early sequences of action and conversations with Marcus are light and fairly humorous, and this contrasts nicely with the scenes towards the episode's end. G'Kar is finally captured by Centauri soldiers, and paraded into the Emperor's throne room as a gift for Londo Mollari (Peter Jurasik). It's a beautiful, heart-breaking scene. First there's G'Kar's plaintive question asking if anybody knows where Garibaldi is. He doesn't want to fight the Centauri any more. He doesn't want to shout or struggle, or fight back: he simply wants to find his friend. It's a massive shift in character for G'Kar, who started the series so full of bluster and aggression. Then there's Londo's horrified reaction to seeing him: jump back two seasons and Londo would be slapping his hands with glee at the prospect of torturing and killing his arch-nemesis. Now it's the last thing in the universe he wants.

The deal they strike at the episode's climax - that G'Kar will help assassinate the Emperor and Londo will ensure the Narn are freed - is a major turning point for the whole series. Londo and G'Kar are the best characters without exception. They've had the best plots, the best dialogue, and the best development. Now they're allies - it's a remarkable progression that deserves a huge amount of praise. Their conversation is outstanding in terms of both writing and performance.

Sadly these scenes are counter-balanced by Sheridan's conversations with Lorien (Wayne Alexander), the mysterious alien he has met on the surface of Z'ha'dum. Stracyznski is a big fan of The Twilight Zone and an even bigger fan of Patrick McGoohan's surreal 1960s series The Prisoner, and so it's not a surprise to see him indulging in a very weird, lengthy conversation in this fashion. Lorien explains that Sheridan is trapped between life and death, and that he needs to choose whether he wants to continue living or if he's ready to move on. That's not in itself a problem - it's just that he talks for so long about it. It's like Straczynski wanted to drive his message home, then glue it liberally, nail it to the wall and finally beat it with hammers. It's incredibly annoying to sit through, but at least it sets Sheridan up for his return as Gandalf the White in the next episode.

Lorien also has lengthy prosthetic fingers. You can tell because Wayne Alexander keeps making weird curling motions with them at the camera, just in case we didn't notice them the fourteenth time.

While the Sheridan scenes are annoying, the G'Kar and Londo scenes are so good that they pull this episode well over the line in terms of quality. Season 4 is now running two-for-two in the quality stakes.
Posted by Grant at 7:42 AM