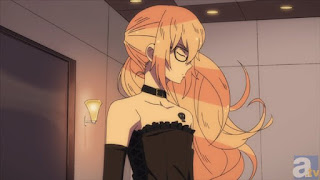 After a two-year hiatus Gatchaman Crowds has returned to Japanese television with a second season, subtitled Insight. It has been launched with this special half-length prologue episode, "Inbound". This episode was made available online rather than broadcast, but does a decent job of setting the series up for new viewers.

So the series in a nutshell: the Earth is defended from alien invaders by a group of individuals known as the Gatchaman. They were each selected by a mysterious alien named J.J. who gifted each of them with a NOTE, a notebook with which they can transform into a super-powered mechanical hero. The Gatchaman team's latest recruit is Rui, a trans woman who used alien technology to invent CROWDS, a social media service that allows users to temporarily manifest elsewhere in the world as spherical-headed powerful entities. In short, anyone in the world can join the CROWDS for good or ill, and the Gatchaman remain to keep the piece and protect the world from serious threats.

What the series is not is a direct sequel to previous animes in the Gatchaman franchise. It shares a title, and regularly gives little kisses to the past in terms of names or voice actors, but it's very much its own self-contained series.

This prologue episode gives the basic set-up before diving into the new status quo. Rui is now a member of the Gatchaman, and appears to have the power to open portals between two points in space. The CROWDS are still active, but there appears to be a new secret organisation called VAPE whose members manifest as red-coloured CROWDS. Here they attack the jet aircraft carrying the Japanese Prime Minister, under whose watch the original crisis in Season 1 took place. The Gatchaman leap to his defence.

This is a great short episode, showcasing the regular cast and providing an exciting little vignette. Each character is explained, and any changes to their look or status quo are made clear. Hajime, whom we last saw with the Season 1 villain Berg Katse somehow trapped inside her head, appears to be continuing in that capacity. Whenever a Gatchaman is transformed, we can see their actual body inside some weird virtual space. When we see Hajime in that space, Katse is trapped in there beside her. He appears to exist as a voice in her head now; I'm interested to see where this goes.

It's also great to see Rui as a fully fledged member of the team. It pushes her forward in a very logical way.

I'm really glad that this series got a second series. It had a slightly awkward start back in 2013 but finished off in an outstanding fashion. Based on this prologue it looks as if they're going to jump up from that point and develop some all-new angles and ideas. I'm watching this series via Crunchyroll if you want to give it a go yourself - I'm pretty sure the whole of Season 1 is still online there.
Posted by Grant at 11:01 PM