Star Trek: Enterprise: "These Are the Voyages" 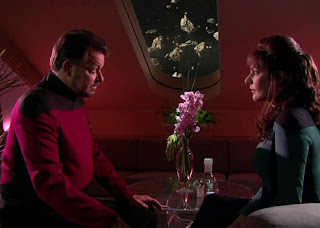 Ten years after their mission of exploration commenced, the crew of the Enterprise are on their way back to Earth for the signing of the Federation Charter - except they're not. We're actually in the late 24th century, where Commander William Riker (Jonathan Frakes) struggles through a personal crisis by visiting holographic reproductions of the original 22nd century Enterprise using the USS Enterprise's holodeck.

This is indeed the final episode of Star Trek: Enterprise. It's also the final episode of any Star Trek TV series to date. Between 1987 and 2005 Paramount produced 622 separate episodes across four separate series. Over-exposure and a lack of any real changes or shake-ups in the final few years pretty much guaranteed that a mainstream audience effectively abandoned the franchise. Enterprise's planned seven-year run was cut short at the four-year mark, and audiences didn't get any new Star Trek until J.J. Abrams rebooted it with an all-new film in 2009.

The fact that such a successful and long-running franchise (25 seasons in 18 years) was coming to an end clearly weighed heavily on the minds of executive producers Rick Berman and Brannon Braga. This doesn't feel like a series finale for Enterprise. The unexpected focus on Riker and Deanna Troi (Marina Sirtis) call back to the first of the second-generation Star Trek shows, and attempt to act as some kind of book-end crossed with a special treat for the fans. It's not a treat, of course, for several major reasons, and instead winds up as the least successful or interesting series finale Star Trek has ever had.

The biggest reason is that it denies the Enterprise characters their own finale. They're effectively relegated to the sidelines while the episode focuses primarily on Will Riker: his section of the episode slots fairly haphazardly into the Star Trek: The Next Generation episode "The Pegasus". He knows information that his current captain Picard needs, but he's been sworn to secrecy by his former captain now Admiral Edward Pressman. Whose orders does he follow? Which captain does he betray? Back in January 1994 this process requires a few hours brooding in his quarters - "These Are the Voyages" reveals he spent that time talking to Archer, T'Pol, Trip and the others on the Enterprise-D holodeck.

So now it's two bad things: it's not just denying Enterprise its own conclusion, it's screwing up a perfectly fine episode of The Next Generation while it's going about it. This brings in a third problem: Jonathan Frakes and Marina Sirtis are both more than 11 years older. Sirtis has completely different hair and a strikingly different accent. Frakes is visibly older and heavier. It's a really odd choice, given that the last time we saw both characters they were transferring off the Enterprise so that Riker could captain the USS Titan. Why not set the episode onboard the Titan? Then at least it would have the benefit of showing a bit of conclusion for Enterprise and the future of Star Trek at the same time. Had audiences liked what they saw it could even have kick-started a Titan weekly series and kept the franchise rolling for another few years. Instead, in the depressing tradition of Enterprise Season 4, we get continuity minutiae like a dog chasing its own tail.

So once we've sacrificed half of the finale to Will Riker's personal crises, what is left for the actual protagonists of the show? The Enterprise's return to Earth is sidelined when they're intercepted by the Andorian commander Shran (Jeffrey Coombs), considered dead for the past three years but now alive, well, and begging Archer to help him rescue his kidnapped daughter. There's a showdown on Rigel X (the first planet the Enterprise visited back in "Broken Bow"), and then the Enterprise is invaded by a small gang of aliens, and then Trip sacrifices his life killing those invaders.

It's shockingly bad plotting. There's no set-up or foreshadowing: Trip and Archer are walking down a corridor and get ambushed by aliens. They knock Archer out cold, Trip leads them into a corner, bluffs his way into a junction box, and sets off an explosion killing them all. Goodness knows why he didn't just keep bluffing for another 60 seconds. Goodness knows where the rest of the crew was - it is seriously the most weirdly deserted corridor in all four seasons. We don't even get to see Trip die. The last we see of him he's being treated in the sickbay. In the following scene T'Pol is packing up his things.

The 22nd century portion of this episode is trite, forced and poorly worked out. The 24th century portion of this episode is forced-in, unwelcome and redundant. It's an insult to its cast, who've worked for four seasons on this series only to be denied a proper conclusion. It's an insult to the popular character of Charles "Trip" Tucker, who has to be re-written as an idiot in order to die for no justifiable reason. It concludes with the signing of a follow-up treaty to the treaty signed at the end of "Terra Prime". It's just one ongoing, tedious 40-minute epilogue that reflects badly on every cast and crew member involved.

There will be more Star Trek TV shows in the future I'm sure, but as an end to an uninterrupted run of 25 seasons this is a really embarrassing note on which to exit. It's not simply bad; it's weirdly bad. You watch the episode and try to work out who could possibly have thought at any stage that it was a good idea, and no one comes to mind. Season 4 ends with 10 good episodes out of 22: this is not one of the 10 good ones. The quality ratio: 45 per cent.
Posted by Grant at 3:09 PM