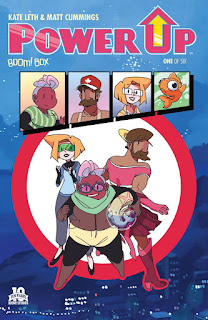 Kudos to Boom Studios for pushing such an aggressive schedule of intriguing non-traditional comic books as part of its schedule. They've had some great success with it as well, with both Lumberjanes and Giant Days finding solid readerships and an awful lot of critical acclaim. They're likely hoping for something similar from Power Up, their latest all-ages comic series. Sadly I'm not sure they're going to get it.

The concept is great: some cosmic force basically turns four individuals into a super-powered monster-fighting team. Instead of picking, as the genre would indicate, four Japanese high schoolers, magical powers are granted to a suburban mother of two, a construction worker, a disaffected shop assistant, and a goldfish. Matt Cumming's artwork is also great for the most part. There's a section towards the end of the first issue where things get very muddy and it becomes difficult to clearly follow what's going on.

It's at the scripting level where things seem to fall down. Kate Leth has written the book is a two-by-three layout of six panels per page, and that doesn't leave the book much room for things to actually happen. By the time I had finished the first issue the story had hit the point I would have expected it to reach by page 10. This is very decompressed stuff, and with such a silly and whimsical premise that kind of slow storytelling could be the kiss of death. (2/5)

Under the cut: reviews of The Book of Death: The Fall of Bloodshot, Justice League 3001 and We Are Robin.

The Book of Death: The Fall of Bloodshot

The Book of Death is a current Valiant miniseries about, in part, a girl bearing a book that foretells the future. This spin-off issue is basically the future of Bloodshot. Generally speaking I'm not too big a fan of these event spin-off books - they usually feel like cheap cash-ins on a popular series - but Valiant tend to do a much better job of them, making them non-essential but still very entertaining. This is little different, offering a centuries-long story in the space of 20 pages, and boasting solid writing and great artwork. Is it necessary? No. Is it good? Absolutely. (3/5)

Giffen and DeMatteis are clearly having a ball with this book, adding one DC superhero after another to its crazy mixture of nostalgia and far-future shenanigans. This issue introduces Supergirl to the mix, as well as a pretty damned funny adventure fighting the Starro of the 31st century. There are even jokes mocking the fact that this low-selling comic almost certainly only has a few months to live before DC have it cancelled. Great art, silly jokes: it's all a lot of fun. (3/5)

I was a little bit uncertain about We Are Robin last month. I liked the concept - a bunch of Gotham teenagers gang together and fight crime - but there was something about the first issue that didn't quite sit right. It had a similar problem to the one I had this week with Power Up, in that not a lot really happened. This issue makes up for that shortfall with a great sense of pace, intriguing plot developments and a brilliant set-up for the series going forward. Corona and Haynes' artwork is great too, giving the whole book a sort of younger, more urban vibe than the other Batman tie-in books. I think they've hooked me for the long haul: this is a great issue. (5/5)
Posted by Grant at 8:54 PM