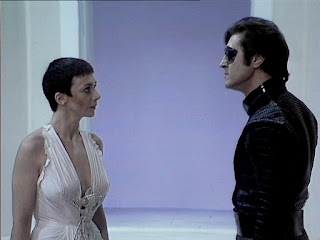 An over-confident Blake (Gareth Thomas) launches a covert attack on Control, the Federation's central computer network located on Earth. With the Federation secretly aware of the attack, and with a traitor in his midst, Blake may have over-extended himself too far.

"Pressure Point" is a more significant episode of Blake's 7 than most, and we'll get to why in a paragraph or two (in order to spare anybody planning on watching this for the first time from discovering it's fairly shocking conclusion). Even from the outset, however, it's clear that Blake's plan is a big deal. For a season and a half he's been running, and launching odd little strikes against outlying garrisons and communication centres. Now he's charging headlong into the very centre of the Federation's power, whether his crew are behind him or not.

Blake expects to launch his attack with the assistance of the Earth-based resistance leader Kasabi. He doesn't know that Servalan (Jacqueline Pearce) has been tracking Kasabi for some time, has had her captured, and is now using her as a hostage to ensure her daughter Veron to lure Blake into a trap. There's some nice backstory implied here: it turns out Kasabi was Servalan's former tutor, and presumably once quite a significant and powerful figure in the Federation bureaucracy.

Technically the episode feels a bit bland and cheap. Control is hidden underneath what's basically a rather pleasant-looking woodland, and once inside it's hard not to notice that the multiple underground levels are all the same simple set with a different coloured gel put over the studio lights.

What makes the episode work are its two twists. Firstly when Blake overcomes Servalan's trap and finally makes his way into the centre of Control it turns out to be empty. It's been empty for 30 years or more, with all of the Federation's computer systems relocated off-world and Control simply left as a honey trap for resistance leaders like Blake. This is the kind of marvellous and depressing twist that makes Blake's 7 such a wonderful series. It gives the audience real hope that Blake is about to achieve something significant and cruelly snatches it away.

During Blake's escape, Travis throws a grenade and causes a ceiling collapse. Blake manages to get out, but Gan (David Jackson) sacrifices his life to ensure his friends survive. In the context of a late 1970s science fiction series it is a jaw-dropping move. There's always a feeling with these kinds of TV shows that the regular cast are basically immune. Nobody watches Doctor Who expecting Sarah-Jane to be murdered, or watch Star Trek and expect Mr Sulu to be killed in an accident. Of course with big-budget contemporary shows like Game of Thrones a character death has become almost banal to watch, but in 1979 it was an enormous surprise.

It gives the series an edge: suddenly no one is safe. This wasn't a season finale; we're halfway through the second year and one of the cast has unexpectedly died. On a pragmatic level, removing Gan was a generally good idea: there were already too many characters in the series, and the character was being badly under-written (Chris Boucher made no secret of his distate for Gan). On a more thematic level it feels like the final bit of punctuation in sealing off the tone of the show. We already knew the characters were cynical, terse, and often at odds with one another - now we've learned they are also expendable.

What makes Gan's exit so unexpected is that the episode has barely focused on him at all. He doesn't get a glorious swansong, or any particular focus. He's simply part of the deal, with business as usual, right up to the point when he's suddenly dead.

Gareth Thomas is great in this episode. He begins the episode in an idealistic rage, trampling over contrary opinions and disagreements without even thinking about it. When he thinks he's succeeded he's jubilant. It's a striking moment: Blake running into an empty room, shouting "I've done it!!" with such overwhelming zealotry. Within five minutes one of his friends is dead, his confidence is shattered, and the series is never quite the same again.

Five episodes in, and three have been good. The quality ratio rises to 60 per cent.
Posted by Grant at 9:42 AM