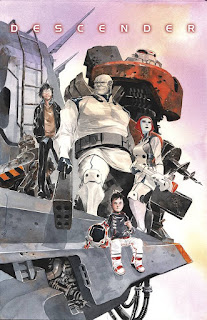 Descender continues apace with its fifth issue. The boy robot Tim-21 has been captured by raiders and taken to the planet Gnish, where the systems-wide cull of all robots and androids was first initiated. There the local king is intent on disassembling Tim until he can find a link to the mysterious Harvesters that decimated the United Galactic Council.

This issue really broadens the scope of the series into a fully-fledged space opera. You've got the rival alien civilizations, the huge unexplained objects (the Harvesters), and a pile of action, drama and intrigue. The world building is impeccable. The story is developing in an interesting fashion. This is, basically, yet another exceptional science fiction comic from Image - one that can sit comfortably alongside Saga, The Fuse and Copperhead.

Dustin Nguyen's artwork is distinctive and helps to really set this book apart from others on the market. He's basically colouring his own pencils, and bypassing inking altogether. This gives the book a sketchy, sort of watercolour aesthetic to which I'm really warming. One more issue of the first arc next month, and then the first collected edition in September: one way or another, if you're a fan of comics and science fiction you should definitely check this book out. (4/5)

Under the cut: reviews of Catwoman, Gotham Academy and Pisces.

Selina Kyle is now splitting her time between running a crime family and getting to the bottom of Batman's disappearance. This is a great issue that pushes forward all of the various elements of the plot while weaving Spoiler (aka Stephanie Brown) into the mix at the same time. It's great to see Spoiler turn up again - she's a great character and after all the effort of DC's re-introducing her in Batman Eternal it would be a shame not to have her appear somewhere. This continues to be a rock-solid title with a really distinctive edge. (4/5)

Olive's mother is dead, and the only person she's willing to open up to is Tristan. Tristan keeps transforming into a mad-bat, and rushing to the assistance of new science teacher Dr Kirk Langstrom. Kyle wants to keep Olive away from Tristan, but is he thinking of her best interests or just jealous of her attentions? Mia, meanwhile, just likes using the Gotham Academy's secret passages to spy on everyone. Gotham Academy is pretty much what it says on the tin: a teen soap set in the world of Batman. Karl Kerschl's artwork is pitch-perfect for the kind of story it's telling, and I continue to love how this distinctive, unusual series can be situated so easily inside the DC Universe. (3/5)

So Dillon Carpenter is a Vietnam veteran having troubling moving on from his wartime experience. He is also a NASA pilot, trapped god-knows-where and reliving his recent past in one chained-together fever dream of flashbacks and nightmare imagery. As the flashbacks approach his present it feels as if we might finally be approaching some kind of answer as to where precisely Dillon is and what's going on. It's difficult to review a comic like this issue by issue, because whether or not the series works depends entirely upon how Kurtis J. Wiebe wraps up the storyline. As it stands now it has great potential: great writing and strong artwork by Johnny Christmas. Now it's all down to how the story ends. (4/5)
Posted by Grant at 7:34 AM