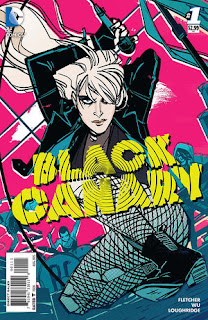 To paper over the relocation of the DC Comics offices from New York to Los Angeles readers had to sit through Convergence, a weirdly ill-advised mega-crossover of 40 two-part miniseries between April and May. With that out of the way, it's back to business as usual with a mini-relaunch: new status quos in most of the ongoing titles, plus a whopping 21 new ongoing monthlies and miniseries.

Generally speaking June was a great month for DC, with most ongoing titles enjoying small jumps in the number of units sold, as readers took the opportunity to sample some of these new creative directions. Superman has had his secret identity revealed to the world and lost his powers. Jim Gordon has become Batman. The Green Lantern Corps has gone missing. Robin now rides around the world on a giant bat monster.

Where I'm most interested, however, is in these 21 new titles. Which ones grabbed the market's attention and which ones failed to make an impact? On average, each new title shifted 45,472 units via Diamond Distribution. Five of the books shifted above average. The other 16? Not so much. So how did all of the new titles go?
First up, here are the five big performers: these all sold more than the average number of units across the 21 new titles.
Another eight books launched to a pretty reasonable reception. These books seem guaranteed for a year or more before their sales decline too far.
The last seven launches all did fairly poorly by my estimation.