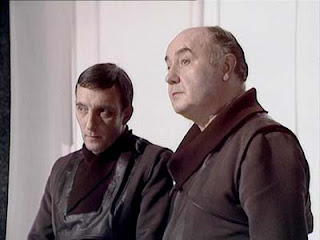 Emotionally shattered by the death of Gan, Blake (Gareth Thomas) abandons his crew to an apparently desolate planet. Once there, he discovers it is not as uninhabited as he had been led to believe. Over at Space Command, Travis (Brian Croucher) faces trial for a civilian massacre - although everyone knows he's simply a victim of power games between Supreme Commander Servalan (Jacqueline Pearce) and the Federation President.

"Trial" is an episode of two largely unconnected halves, as both Blake and Travis face up to some kind of justice. Both men undergo a transition during the episode, although by the end it's largely business as usual. Blake is back fighting the Federation, and Travis - while now a runaway criminal - continues to hunt down Blake. One storyline - Blake's experiences on the alien planet - is fairly dull and tedious. The other - Travis' trial - is a wonderfully written and performed little political drama.

So first up: Blake directs the Liberator to an apparently uninhabited planet, and teleports down alone. He's effectively hard-wired the ship to not come back for him for 13 hours. It's essentially a forced opportunity for both him and his crew. When the 13 hours are up they can meet for a rendezvous, or Blake can remain in hiding somewhere like a hermit, or Avon, Vila, Cally and Jenna can depart with the Liberator and strand him there. The problem is - and Avon (Paul Darrow) seems particularly aware of this - that when you boil it all down it's essentially a storyline about Blake having a long good sulk about the fact that his over-confidence got Gan killed.

It doesn't make Blake a particularly likeable character. While on the surface he meets a deeply irritating alien character named Zil (Claire Lewis), and almost gets eaten by the planet itself. It's a very simplistic, silly sort of science fiction story. The more interesting parts of this storyline are back on the Liberator, where his crew debate whether or not to continue following him. It's a particularly interesting series of scenes for Avon, who's always been the series' most complex and unpredictable character.

Much more fascinating is the trial of Commander Travis. In many respects it's classic BBC story-telling: hamstrung by a low budget, writer Chris Boucher effectively expresses a growing political crisis through the use of a handful of characters. Servalan's continued failure to hunt down and eliminate Blake has led to a rapidly approaching inquiry. She's therefore hung Travis, who is a severe liability given what he knows, out to hang. It's an interesting trial: he's not actually framed for anything, since the massacre of which he's accused of ordering definitely happened. He's clearly guilty from the outset - it's simply that Servalan has stopped defending him, and is now allowing justice to run its course.

I'm a big fan of Rontane (Peter Miles) and Bercol (John Bryans), a pair of high-level civil servants who act throughout the episode as something of a classical chorus. They comment on the events as they unfold, give it context, and generally point to a broader society outside that the series simply can't afford to showcase. It highlights Servalan's growing power base within the Federation, the tension between the Federation senate and Space Command, and the concern the President has that Servalan is aiming directly for his job. Both Rontane and Bercol appeared in an identical sort of role back in Season 1's "Seek Locate Destroy" so it's nice to see them re-used. It gives it all a nice sense of consistency.

Of course by the episode's end Travis has been found guilty, but an attack on Space Command by the Liberator allows him to escape. Servalan lets him go as well: he's out of her hair, and won't be appeared at an inquiry, and she can still rely on him to hunt down and eliminate Blake. It's the sort of ending that Blake's 7 does so well: the heroes have survived to fight another day, but the villain is the only one who's experienced anything approaching a victory.

We're six episodes into the season, and four episodes have been good. The quality ratio rises to 67 per cent.
Posted by Grant at 9:36 AM