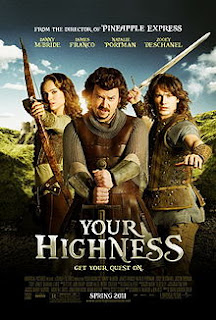 Comedy is such a subjective genre. You can critique and disassemble dramatic films all day, finding solid arguments as to why they work or falter, whether or not their stories are well plotted and paced, or if they express their themes and tones in successful ways. Comedy is simultaneously a lot easier and a lot more difficult to analyse. The bottom line for judging a comedy is remarkably simple: did it make you laugh? Analysing a comedic film beyond that point gets tricky, because a film can be poorly plotted and characterised, shoddily produced, and generally poor in quality - yet all of those criticisms are ultimately meaningless if it managed to make you laugh.

Your Highness is a 2011 comedy film directed by David Gordon Green (Pineapple Express) and starring Danny McBride, James Franco and Natalie Portman. It is a high fantasy parody crossed with a stoner movie. Its characters are thinly drawn and its plot is ridiculously generic. It stops and starts its way along a predictable road, filling itself as it goes with obvious jokes about sex and drugs. It is by many quite sensible criteria an absolutely terrible film - yet all of these criticism are ultimately meaningless to me, because it manages to make me laugh.

Prince Thadeous (Danny McBride) is a surly childish noble, second in line to the throne of Mourne after his heroic, credulous warrior brother Fabious (James Franco). When Fabious' new bride (Zooey Dechanel) is kidnapped by the evil wizard Leezar (Justin Theroux), Thadeous is forced to accompany him on a quest to retrieve her - and to stop Leezar from taking over the world. On their way they are accompany by Isabel (Natalie Portman), an archer on a dangerous quest of her own.

McBride plays his role with a minimum of effort, as if he's simply larking about (he also co-wrote the screenplay). Franco gives a highly enthused performance, but he's full of narrowed eyes and suspicious-looking smirks that tend to work against the fresh-faced idealism he's supposed to represent. Natalie Portman puts on an affected English accent and plays everything very straight and serious, which doesn't do much beyond showcase how one-dimensional her character is.

There are a surprising number of genuinely talented British actors in the film in supporting roles, including Charles Dance, Damian Lewis, Toby Jones and even Horrible Histories star Simon Farnaby. They all give much better performances by the leads, mainly due to being the kinds of performers can make reading excepts of telephone books interesting.

Some of the film's best elements are in its production design and visual effects. A greater number of practical effects are employed than one would expect to see in a contemporary Hollywood fantasy, and that actually gives the film a nice tactile aesthetic that harks back to many fantasy films of the 1980s.

But here's the thing: the bad acting and the weak plot really didn't matter all that much to me, because I laughed. I laughed consistently and with enthusiasm. Your Highness is a terribly made film, but it's a terrible film that has a lot of genuinely funny bits in it. It's puerile humour, often childish and silly, but it's still really funny stuff. As I said, comedy is a subjective genre. In the end, whether or not it's funny is all that really matters. This one is funny.
Posted by Grant at 10:34 AM