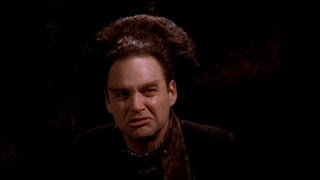 The Shadows have returned to the war, obliterating the surface of any planet aiding the Vorlons with nuclear warheads. While Sheridan (Bruce Boxleitner) prepares to launch a final counter-offensive around the planet Coriana 6, Emperor Cartagia travels to the Narn homeworld to observe G'Kar's execution - and to fall into Londo's deadly trap.

I have absolute no idea what happened in the broadcast schedule of Babylon 5 that led to only a one-week gap in broadcast between the Season 3 finale and the Season 4 premiere, yet an eight-week gap between "Falling Toward Apotheosis" and "The Long Night". That must have been enormously frustrating for viewers at the time. These first episodes of Season 4 have been aggressively serialised, to such a degree that they all tend to run into one another when viewed on home video.

To be honest the bulk of the action on Babylon 5 this episode feels like filler, as if it's waiting for the Centauri storyline to work itself out before progressing to a major battle the following week. There are, thankfully, more than enough Centauri plot developments to see the audience through.

Londo begins the episode meeting in secret with a group of Centauri leaders to get their support in assassinating Cartagia. I'm really glad this scene is here. It achieves two things: firstly it makes the entire coup d'etat much more believable, and secondly it opens up the fictional universe a little more. Much of the Centauri storyline has played out among two-to-five actors in a room, in a very low-budget 1970s BBC fashion. Having scenes such as this allow the story to expand, and lets the audience feel like something genuinely significant is happening.

It's a pity then that Cartagia's assassination is so disappointing. It has a number of little twists and complications, but they're all twists that the audience can see coming. Londo has had G'Kar's chains weakened so that he may break his bonds at a critical moment and cause a distraction. At the final moment Londo learns Cartagia has had them replaced. G'Kar breaks them anyway, because of course he was going to break them anyway. Similarly the identity of exactly who murders the Emperor was obvious about three episodes ago. It's well performed, but it's also predictable. The aftermath of the event also feels oddly weak. It lacks both gravitas and scale. The Centauri Emperor is dead, his people are leaving the Narn homeworld for good, and it all feels just a bit too much like dinner theatre. For one thing: if you've invaded an entire planet and subjugated its entire population, I'm pretty sure you can't simply pack up and leave within 12 hours.

Vir's emotional turmoil over his part in overthrowing Cartagia plays out in pretty much the most stereotypical fashion imaginable: he gets drunk, and raves at Londo when the latter comes to find him. Stephen Furst plays what he's given impeccably, but what he's given is a bundle of clichés. It's the Straczynski curse striking again: long, impressive monologues he aces, but with ordinary life and emotion he tends to stumble.

In many respects I'm rather glad this Cartagia subplot is over and done, because it means we will get less of Wortham Krimmer's not-entirely-ready-for-prime-time performance, and hopefully far fewer Jesus references in G'Kar's lengthy incarceration and torture. This episode he staggers into Cartagia's court as if he's Christ dragging his cross to Golgotha. It's laid on so thick I can hear half the audience screaming we get it at the production team.

The clichés aren't contained solely to the events on Narn. Back at the station Sheridan has two conversations with a White Star fleet commander named Erickson. The first establishes what a great, loyal guy Erickson is. The second sees Sheridan sending Erickson on a stiff-upper-lip mission to certain death in order to draw the Shadows toward Coriana 6. It's all painfully trite stuff, made unintentionally amusing by the fact that the actor playing Erickson - Bryan Cranston - went on to become one of the most respected and feted TV actors of his generation.

This is the first episode of the season where the serialised format feels as if it's slid out of alignment. Too much happens too fast in one plot line, while the other drags its feet and meanders far too much. It's a shame: it all seemed to be going so well. Nonetheless, it still leaves the season with four good episodes out of five thus far, and a quality ratio of 80 per cent. Next episode: the Battle of Coriana 6.
Posted by Grant at 7:47 AM