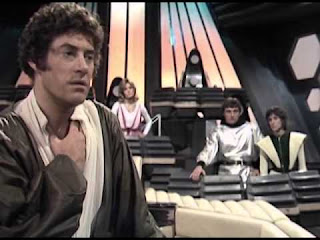 After weeks of fleeing from Federation pursuit ships, the Liberator crew find themselves over-stressed, over-tired, and badly in need of relaxation. When they spot a Federation cargo ship travelling beyond the edge of the galaxy, Blake can't resist following it: he discovers a hidden planet, Horizon, whose indigenous people are enslaved in Federation mines, and a reluctant leader who's been fooled into betraying his own planet.

This is one of those weird episodes of television where no matter how many times I see it I simply forget about it entirely, and struggle on each series rewatch to recall what it is about. Having just given it yet another go, I'm not surprised: "Horizon" is a deeply dull and underwhelming story, and honestly doesn't have much to recommend it.

This episode marks the Blake's 7 debut of Allan Prior. He was one of the founding writers of the popular police drama Z Cars, but whatever his talents were they never extended to writing science fiction. This is the first of five episodes Prior would write for the series. Not one of them was good. He writes incredibly simplistic characters, for one thing. He also struggles to match the series' tone and dialogue. Characters who are usually acerbic and snappy are sullen and quiet. Witty banter has been replaced by perfunctory dialogue: it pushes the plot along, but it's a fairly dull plot and it removes one of the series' greatest strengths.

The episode works as a blunt allegory for 19th century British colonialism, with Horizon's young leader Ro being bullied into a 'civilized' life by the Federation's sneering Commissar. It's an interesting idea for an episode, but it's ruined by Prior hammering the allegory into the script so hard that it effectively breaks. There's no subtlety here. There's no nuance or flavour. Just a very worthy story about how it's bad to colonise an already-inhabited place.

Darien Angadi is earnest as Ro, but the script lets him down. William Squire gives a one-note performance as the Commissar, but again it feels as if the problems and blame all lie with the very limited character he's given to perform. The regular cast coast along largely on automatic, with a few shoe-horned into acting completely out of their usual character. Cally, for example, appears to have transitioned from gun-slinging terrorist into a sort of grumpy nurse-come-nanny.

We're now four episodes into Season 2, and only two of those episodes have been any good. That leaves it with a quality ratio of 50 per cent, which is just a little bit worrying. I remember the season getting better from here; I really hope that's true.
Posted by Grant at 11:22 PM