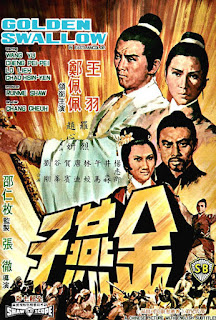 Golden Swallow (Cheng Pei-Pei), a talented martial artist who wields a pair of daggers, is badly injured when defending a farm from bandits. She is nursed back to health by Golden Whip (Lo Leih), and a romance begins to blossom between them. That romance is disrupted when it becomes apparent that someone is murdering thieves and gangsters across the province and framing Golden Swallow for the killings. That person is Silver Roc (Jimmy Wang), a former boyfriend of Golden Swallow's from her time in martial arts training - and the murders purely exist to attract her attention so they can be reunited.

Let's start with the enormously weird bit of that synopsis: a brooding ex-boyfriend trying to get his one true love's attention by murdering literally dozens of people to make her notice him. That's a romantic gesture that goes well beyond creepy and into fully-blown criminal insanity. While Silver Roc's behaviour is not condoned by Golden Swallow, neither she nor the film in general really treat the man's actions with the slack-jawed nervous horror that they deserve.

So what the hell are we talking about here? This is Golden Swallow, a 1968 sequel to the legendary Hong Kong wuxia movie Come Drink With Me. Martial arts star Cheng Pei-Pei reprises her role of Golden Swallow, this time finding herself at the centre of a violent love triangle. It's a Shaw Brothers production: basically if you close your eyes and imagine the most iconic and archetypal old-fashioned Hong Kong action movie that you can, you're probably right on the money.

It's a film packed with Hong Kong film legends. Cheng herself is an iconic figure, although I suspect the majority of 21st century viewers will know her best from her late career performance as Jade Fox in Crouching Tiger Hidden Dragon. Her suitors are played by Lo Leih, star of the classic martial arts movie King Boxer, and Jimmy Wang, best known as The One-Armed Swordsman. The film was shot on location in Japan by the noted director Chang Cheh, an inventive and immensely talented filmmaker widely regarded today as 'the godfather of Hong Kong cinema'.

The film is cheaply made but inventively choreographed and shot. Chang uses some fairly experimental angles during the fight scenes: in one the action appears in small shafts of light around a shadowy farmhouse, in another much of the action is shot from above. In another an entire sword duel is played out in close-up, transforming what would usually be a gracefully choreographed bit of swordplay into a furious and emotional flurry of blows, pre-figured the kind of immerse, shaky film-making that made the Bourne movies so popular 40 years later.

The acting varies. Both Cheng Pei-Pei and Lo Leih acquit themselves admirably, while Jimmy Wang comes across as a bit too stiff and formal as Silver Roc. Cheng in particular is impressive. On the one hand it periodically feels as if she is being side-lined in her own film, but when she gets the spotlight she works it brilliantly. She was - and remains - a very charismatic and photogenic performer.

It can get quite bloody and confronting in times, never visually graphic but certainly quite sharp and excessive in the manner of its violence. People get cut in half. Others slashed violently across the face. In one scene a 12 year-old boy commits suicide by disembowelling himself. It's something of a trademark for Chang Cheh as far as I can make out: not content with simply showing gravity-defying feats of kung fu and swordsmanship, he's always intent on demonstrating that violence really hurts.

As a sequel it can't hold a candle to its predecessor. As a simple wuxia (a Chinese genre typified by wandering martial arts and swordspeople) exercise, it's rather satisfying and certainly very entertaining. Yes the acting is quite mannered, but that was the fashion of the genre and the time. Yes the blood is garish and fake. It's all, however, tremendously fun to watch.
Posted by Grant at 11:07 PM