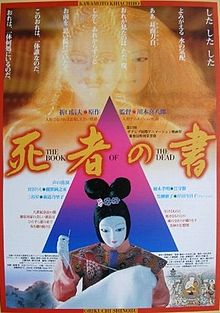 Nara, Japan: 750 CE. Iratsume, a young noblewoman, becomes obsessed with the Chinese religion of Buddhism that is spreading across Japan. When she transcribes one thousand copies of a particular sutra she has a vision of the Buddha between the peaks of a nearby mountain. When she follows the vision she discovers a mountain temple - and learns that her vision may not be divine at all, but instead is the apparition of a long-dead Prince whose soul cannot rest.

The Book of the Dead is an animated feature film directed by Kihachiro Kawamoto. I suppose it could be described as an anime, being as it's both Japanese and animated, however it's not like any other Japanese animation I've seen. This film employs not hand-drawn animation but rather stop motion. Its story plays out via elegant theatricalised puppets against miniature sets.

I have no idea whether Japan has a particularly rich history of stop motion animation or not. I know Europe does, starting with Ladislaw Starewicz and running through the past hundred years. Kawamoto even went to Europe to train in the field, working underneath the Czech master Jiří Trnka in Prague.

It's a very beautiful film, with some outstanding attention to detail and beautifully constructed puppets and costumes. Hair and clothing billows in the wind, characters perform complex tasks, and the story is presented with a wonderful eye for period detail. Sadly that's almost all the film is, since in most other respects it's dramatically inert.

The film is based on a novel by Shinobu Orikuchi, and tells a very traditional story of stoic honour, religious devotion and supernatural longing. In many respects it echoes Japanese storytelling in general terms. It's very static and reserved, and takes its time in letting the story unfold. There's a fair amount of ellipsis, with elements of the story either not being properly introduced or completely resolved. When told with live-action actors, or subtle hand-drawn animation, such stories are profoundly beautiful and emotionally rich. When told with largely inanimate wooden models, it becomes a bit of a chore to sit through.

Animation fans keen to see some lovely stop motion work will likely enjoy this film, as will anyone with a real enthusiasm for traditional Japanese folklore. General viewers are likely to wander off before the story's done.
Posted by Grant at 11:04 PM