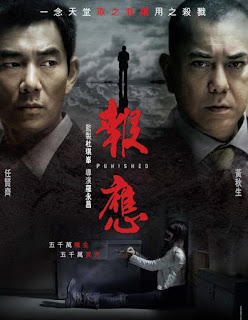 Wong Ho-Chiu (Anthony Wong) is a Hong Kong property tycoon. After his wife's death he remarried a younger woman - something that his rebellious daughter Daisy (Janice Man) will not accept. Daisy lives a life of drugs and scams, stealing from her father to pay for her wayward lifestyle. When Daisy goes missing, and Wong receives a ransom demand from her kidnappers, his life begins to collapse around him as he assigns his bodyguard - a former criminal named Chor (Richie Ren) - to help get her back and punish those responsible.

Punished is a 2011 thriller from Milkyway Image, Johnnie To's celebrated production company. The film is directed by Law Wing-Cheong, whose romantic melodrama 2 Become 1 I reviewed a few days ago. Punished is its polar opposite: not merely a thriller but almost mercilessly bleak. It suffers a pronounced lack of sympathetic characters, with a protagonist who's as much a criminal as a businessman, a kidnapping victim who abuses her new stepmother, and a bodyguard whose strategy to track down a team of kidnappers involves some fairly extreme violence.

This relentless chain of unpleasant activity has an effect on the whole film. It's reasonably well shot and edited, and the actors are all top notch, It's all just so incredibly grim. A lot of people die, and none of them do so peacefully. There's no levity, and certainly no warmth; just bloody-minded revenge until every life on screened has been utterly ruined. It's less of a thriller and more of a classical tragedy.

Anthony Wong does give a tremendous performance as Wong Ho-Chiu, but then he's generally one of Hong Kong's best male performers. I'm a huge fan of his work: he expresses so much emotion with so little movement, and seems single-handedly responsible for what little warmth and self-doubt the character has. Also strong is Maggie Cheung (the one who didn't appear in the Police Story movies) as Wong's wife, who begins the film very affectionate and trusting, and who finishes it a single woman.

I'm really not sure how to respond to this film. It certainly takes the audience on a journey into very dark territory - I'm just not sure whether it's worth taking the trip, It's not a disturbing or challenging ride, just a rather unpleasant and depressing one.
Posted by Grant at 8:01 AM