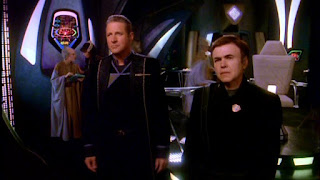 The Shadow War has ended, leaving the militaristic Earth Alliance as Sheridan's next challenge. The Psicop Bester returns to Babylon 5 with a warning for the captain, and Garibaldi resigns from his position as the station's chief of security.

So begins the protracted examination of the after-effects of the Shadow War. There's an odd vibe to this episode. It begins with jubilant celebrations and parties, visibly inspired by the end of World War II (for the victors, anyway), and then sort of segues into business-as-usual. To an extent it doesn't feel like a massive war has ended at all. Everyone does their jobs, the station still turns, and while much of the plot sets up the new storylines there's a weird lack of urgency about it all.

Bester (Walter Koenig) returns, which is a good thing: he's one of the series' best characters, and the fashion in which he's shifted from villain to untrustworthy associate has been organic and believable. Koenig clearly relishes playing the character. He may remain most famous for playing Ensign Chekov in Star Trek, but Babylon 5 gives him so much more material with which to work.

Of course Bester's return gives the show an opportunity to put him head-to-head against Lyta Alexander, whose modifications at the hands of the Vorlons have made her a significantly more powerful telepath than him. Their interactions are great, as is Sheridan's conversation with her at the episode's end: there's an unforeseen risk to Lyta now that wasn't previously clear. When fighting alongside you against the Shadows she's a valuable ally - when the war is over and your station is housing the galaxy's most powerful and potentially dangerous telepath, then you've got a problem.

As a condition on giving Sheridan the information he needs on the Earth Alliance's plans for Babylon 5, Sheridan escorts the Psicop to Z'ha'dum. This sets up the third new plot thread for the future: the Shadows apparently had allies, and they've already raided the planet for technology. There's a nice sense of foreboding about it, although to an extent it does feel a bit like Straczynski is cribbing from Tolkien again: is he setting up a "scouring of the Shire" sequence for future episodes? As I mentioned in my last review, these episodes are all new to me. In 1997 I stopped watching at "Into the Fire".

Garibaldi's resignation subplot is less interesting. It feels like since it began his entire arc has been half-strangled by other storylines. Here there's enough material to push his plot forward, but not enough for it to really resonate. It shifts an intriguing storyline into an irritating diversion that made me want the episode to drop so it could focus on more interesting elements.

This is an understated and slightly underwhelming episode, but it does seem to suggest where the series goes from here. The Earth Alliance is clearly the next challenge to overcome, Lyta Alexander seems like an ominous risk to have around, Garibaldi has been brainwashed by someone (The Psi Corps? The Alliance?) and the Shadow's servants have settled down into their new home: Centauri Prime.

"Epiphanies" gets a tick of approval, albeit a weak tick. Seven episodes into the season, and five have been good. The quality ratio rises to 71 per cent.
Posted by Grant at 9:15 PM