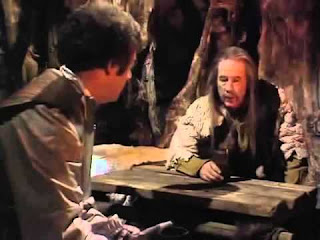 After barely surviving an encounter with a Federation pursuit flotilla, Blake receives a message from the planet Exbar: Travis has kidnapped his cousin, and will kill her unless Blake comes to negotiate. Despite knowing it is almost certainly a trap, Blake decides to teleport down to meet with Travis - only to discover to nobody's surprise that it was a trap.

Writer Allan Prior returns to Blake's 7 for his second episode, and sadly it's not much better than his first attempt. "Hostage" is a remarkably weak episode on a number of levels. The key one, and ultimately the only one that matters, is that it's pretty boring. The script is messy and unfocused, and Vere Lorrimer's direction makes it all feel rather sedate and uninvolved. I don't think anyone was particularly enthusiastic when they made this one.

Let's start with Travis (Brian Croucher). This is the first time we've seen him since Servalan let him loose with a pursuit ship and a crew of mutoids. The mutoids are gone now, without explanation, and instead he's hired a ship full of 'crimos', criminally insane psychopaths who are apparently so regularly used as henchmen in the Blake's 7 universe that there's actually a nickname for them. Quite why the shift was made is not explained here, and they basically act as lumbering idiots. All they seem to do is run around and be fooled by simple ruses.

Travis' plan is a remarkably simplistic one: hold Blake's cousin hostage, lure him to Exbar, and then steal the Liberator. The only think more bluntly stupid than his plan is that Blake actually falls for it. Before long Blake, Avon and Vila have been captured, leaving Jenna to rescue them and save the day. It's never a good plot for a TV episode if it requires the regular cast to be actively stupid in order for it to work.

By the episode's end Travis has been defeated, and left behind on Exbar to face Servalan's wrath. The episode goes through an odd little contortion to get Servalan all the way from Space Command to Exbar, and to be honest there's no narrative reason that requires her to be there. She has Travis untied from his bonds, and sets him off after Blake as an independent agent - so basically exactly what she did only two episodes ago. There's a weird inconsistency to this episode that really jars, as if script editor Chris Boucher simply wasn't paying attention - or was too rushed to work the issues through.

Jenna (Sally Knyvette) might help save the day here, but she doesn't get out of the episode without being catty and jealous about Blake's creepy affections towards his cousin Inga. Sally Knyvette quit the series after this season. Having re-viewed the material she received so far, I can't say I blame her.

Boring, stupid, ponderous, simple. There's a solid four-word review for you. Season 2 is now eight episodes in with five good episodes. The quality ratio drops to 63 per cent. The most worrying thing of all: this episode still has one more Allan Prior episode to go.
Posted by Grant at 6:34 PM