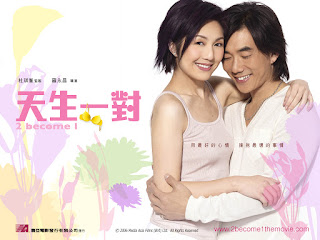 Bingo Leung (Miriam Yeung) is a marketing executive who works hard by day and then hangs out with her bitchy friends in Hong Kong's bars and nightclubs at night. She meets a guy, the attractive Vincent "V" Cheung, takes him home, things get a little hot and heavy- and then he discovers a suspicious lump on her breast.

This is a weird film. It kicks off with all of the banter and innuendo of Sex and the City: three energised professional women out to find the man of their dreams, with comical misunderstandings, a token gay friend, and a dashing love interest with a high-paying job and a sports car. Even the title seems like a cliché: 2 Become 1, clearly referring to the two separate lives of Bingo and Vincent combining in one whirlwind, comedic romance.

Nope. It's a melodrama about breast cancer, and the title refers to Bingo's inevitable mastectomy. I have to hand it to director Law Wing-Cheong: this was not a plot twist I saw coming.

It's actually a pretty terrible film. The comedy of the first 20-odd minutes is broad and stereotypical, and I suppose to an extent that's the point. It reassures its audience that it's just another Hong Kong comedy, before pulling the rug out from under their feet and throwing in the real story. The problem is that the real story is as broadly drawn and stereotypical as those first 20 minutes, just in a different genre. We watch Bingo's struggle to come to terms with her diagnosis, her refusal to treat it seriously, then her being suckered in by Chinese medicine, and ultimately aided by Vincent to make the important choice and face her disease head-on.

There's plenty of humour laced through the film, but it's weird and slightly inappropriate humour, including a lengthy series of scenes about how Bingo is too squeamish to commit suicide. There's also a strange subplot about a young man wanting to become a pop idol, which feels only tangentially related - as if someone accidentally dropped in a few pages from somebody else's screenplay.

If there's anything that makes the film enjoyable to watch - and I did enjoy quite a lot of it despite its best efforts - it's Miriam Yeung's performance as Bingo. She has great comic timing and an strong screen presence, and does her best to make the maudlin scenes less stereotypical and the comedy scenes less egregiously out of place. The rest of the cast never quite extend beyond their thinly drawn characters, although Richie Jen does give it a solid go as Vincent.

Law Wing-Cheong cut his teeth as assistant director to Johnnie To, who also produces this film. From here he's gone on to direct a range of action and crime films. That might be for the best: I'm not quite sure comedy is his strength.
Posted by Grant at 11:52 PM