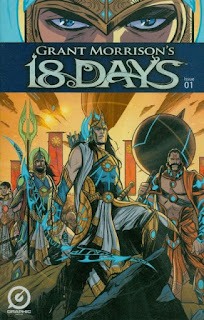 Graphic India is Singapore-based publisher that aims to create popular mainstream comic book and animation works based on Indian culture and mythology. They're clearly out to make American readers sit up and take notice with their new monthly series 18 Days, because they've hired comic book mega-star Grant Morrison to write it.

18 Days basically adapts the Mahabharata, re-imagining some of the details more in the vein of an epic Hollywood blockbuster. It's difficult to gauge precisely how successful it will be at that goal from the first issue, which essentially acts as a bit of a prologue: big panels, multiple splash pages, and lofty narration all combining to build interest but not really tell much of a story. Jeevan J. Kang's artwork is bold and simply drawn, allowing for the colours to really stand out. It's a rather pretty book, all things considered. I just wish there was a little more story.

It's also a remarkably cheap book. Graphic India are doing their best to entice new readers by pricing this issue at just US$1.00. It's a good ploy, and certainly got me sampling the issue. Will I be back for another issue in a month's time? To be honest I haven't yet made up my mind. It's an admirable thing they're trying to do, I'm just entirely convinced it's good enough to warrant buying it every month. One to keep an eye on, I suspect, just in case. (2/5)

Under the cut: reviews of Broken World, He-Man: The Eternity War, The Wicked + the Divine and The Woods.

An asteroid was set to wipe out all life on Earth, so the best parts of the human race escaped in a series of rockets. Then the asteroid missed, and the remainders of our civilization are forced to make a new life with what was left behind. This feels an awful lot like a post-apocalyptic comic in the vein of Y: The Last Man, and certainly would sit very comfortably alongside it in terms of tone and art style. It has that crucial difference, though: the human race didn't get decimated, it just left. How that's going to play out over the remainder of this miniseries is yet to be seen. So far it's fascinating, rather entertaining stuff. (4/5)

This issue's a big of a check-list for things I don't necessarily need to see in this kind of comic book. Too much narration and dialogue crowding out the artwork? Check. Low panel-per-page count, slowing down the narrative? Check. Pointless lengthy flashback to complicate back stories and slow down the main storyline? Check, To his credit, Edgar Salazar's artwork seems strong, and Mark Roberts have done a bright, eye-catching job with the colours. This is a dull, dull comic, however, and given its source material I really want it to be fast-paced, nostalgic and a bit silly. This issue's a fail for writer Dan Abnett. (1/5)

The last issue of The Wicked + the Divine ended in a spectacularly dramatic and upsetting fashion,so to be honest I'm not sure any subsequent issue was going to entirely satisfy me. I've now read issue #12 and I'm genuinely not sure what I think. Regular artist Jamie McKelvie is taking the next six issues off in order to illustrate the new volume of Phonogram, and I didn't really warm to replacement artist Kate Brown. There's an element of her art that might be caricature but really just felt slightly badly drawn to me. After the shock of issue #11, I'm just not finding the characters and story of issue #12 to be grabbing my attention. Fingers crossed it picks up next month. (3/5)

An election for a new student leader is coming up. There are kids high on alien narcotics killing themselves. Something dreadful is approaching on the horizon, but no one who knows will say what it is. The second year of The Woods is building into quite a suspenseful little drama, and I'm honestly not quite sure what Tynion is taking it. This issue introduces what I assume is about to become a key new antagonist, and I'm already enjoying disliking him intensely. Michael Dialynas' expressive art is full of character as always, but I was particularly struck by Josan Gonzalez's excellent colours: dark, moody and rich. (4/5)
Posted by Grant at 11:11 AM