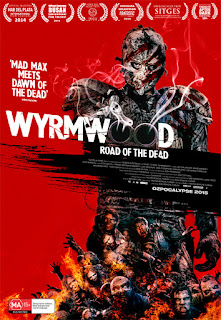 Barry (Jay Gallagher) is an auto mechanic living in rural Australia with his wife and daughter. Barry's sister Brooke (Bianca Bradley) is a photographer in Bulla Bulla. When a strange meteor shower falls over the country, and the population are mostly transformed into zombies, Barry goes on a mission to get to Bulla Bulla and rescue his sister before she is killed.

Wyrmwood is an Australian zombie movie written by Kiah and Tristan Roache-Turner and directed by Kiah. It's an absolute riot: cheaply produced, paced like a runaway freight train and packed with extreme violence, gore, horror and humour. It is the latest film in a long, rich tradition of such films, made in Australia on shoestring budgets and generally referred to as "Ozploitation".

The film actually has its work cut out for it: it's a zombie movie, and that's a genre of horror film that doesn't lack for product. It's almost the default genre for a low-budget filmmaker, and as a result it has become harder and harder for prospective writers and directors to pinpoint a fresh angle on the material. It's actually really easy to make a zombie movie, but it's genuinely hard to make one that people will actually notice.

This one manages to stand out for two main reasons. The first is the ludicrous but entertaining idea that the gas breathed out by the zombies can be used to fuel a truck. The sight of a roughly assembled armoured truck powered by a cage of angry zombies is a pretty unique one, and makes a strong hilarious impact.

The second is the cast. Wyrmwood is packed with the sorts of characters you're only ever going to see in an Australian film, and they all act in specific and funny Australian ways. There are two stand-outs. One is Leon Burchill as Benny, an upbeat, weirdly credulous character who acts as Barry's sidekick after accidentally shooting Barry's first sidekick in the fact with a shotgun. The other is Keith Agius as Frank, a deliberately stereotypical middle-aged Australian concerned as much with his next beer as surviving the zombie apocalypse.

It's a very violent, bloody film, but that kind of comes with the territory. It's also wildly uneven, but again that seems to come with both the budget and the genre. Certainly the tone veers from the deadly serious to the deliberately ridiculous on a scene by scene basis, and it definitely works a lot better when it's aiming for laughs than when it's aiming for some kind of resonance or depth. As a low budget first-time feature it's highly impressive, and if it sounds like your kind of film I can almost guarantee that it will be. I look forward to seeing what the Roache-Turner brothers have planned for the future.
Posted by Grant at 8:48 PM