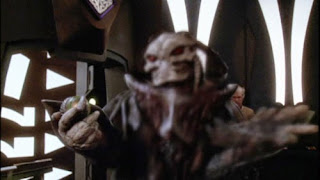 Marcus and Franklin attempt to persuade the Mars resistance to align with Babylon 5 against President Clark. When a string of convoys are destroyed by alien aggressors, Delenn takes command of a group of White Star ships and heads into deep space to investigate.

After some fairly poor episodes of late, Babylon 5 bounces back with a decent story that pushes the series forward a little and helps to build some interesting narratives that will hopefully keep the series heading with proper momentum for a while. It's also fairly well tied together in thematic terms: like the title suggests, it's all about attempts at communication. Marcus and Franklin struggle to win the Mars resistance over. Sheridan struggles over how to fight against ISN's propaganda war. Delenn investigates the raids, and encounters an entirely new - and wholly disturbing - species.

To be honest the Mars plot remains neither here nor there: no so bad that it's painful to sit through, but certainly not so entertaining that you'd miss it if it was gone. It does give Franklin something to do - in this case find a fresh love interest - but it does all feel remarkably perfunctory at this stage.

The episode's real entertainment comes from Delenn's encounter with the Drakh. They're a frighteningly weird species. Their ships look like pulsating flowers. The Drakh themselves - she invites one onboard her flagship to meet with her - are obscured by some strange blurry effect. This goes unexplained, which makes them seem even more threatening. It appears they used to serve the Shadows on Z'ha'dum. With that planet destroyed, they're now homeless and angry. It seems as if Babylon 5 has found its new villains.

Delenn's storyline also kicks off more disturbing revelations about unrest among the Minbari. Since Delenn dissolved the ruling Grey Council, the warrior caste has apparently assembled its own council to take direct control of Minbar's affairs. The implication is that a civil war is looming on the horizon. It's an odd direction to take a series: the main war narrative has concluded, and now the series is splitting off into a variety of smaller, subsequent civil wars. Babylon 5 has to defeat Clark's Earth Alliance. Minbar is staggering towards civil war. Centauri appears to be under the control of an unknown Shadow-related influence.

I can't help but wonder if the series would have been significantly stronger if they had extended the Shadow War, and layered all of these civil wars and social breakdowns along the way. How much more dramatic would it be to pull all of these disparate elements together in time to defeat an ultimate menace? There's so much potential in Babylon 5, but now that I'm more than two-thirds through I feel pretty comfortable in claiming that too much of that potential went unrealised.

There's a lovely scene at the end of the episode between Sheridan and Delenn, showcasing once again that J. Michael Straczynski's real strength is in long, theatrical monologues and dialogues. He writes long, and I still maintain he should be working in a medium - essentially theatre - where that length would get a chance to really flourish.

We're now halfway through the season: 11 episodes down, 11 to go. So far seven of those episodes have been enjoyable, including this one. That gives us a current quality ratio of 64 per cent.
Posted by Grant at 9:25 AM