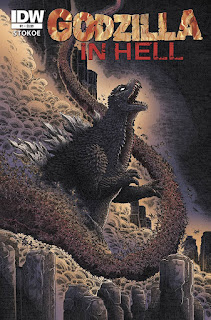 Godzilla is having a pretty decent time of it at the moment: a hit US blockbuster last year with a sequel on the way, and a new Japanese movie coming at the same time. IDW has been on the Godzilla train for a while now, however, and this week sees the beginning of what must be the weirdest take on the character ever: Godzilla in Hell.

It is, rather unexpectedly, exactly what it says on the cover. Godzilla is dead, plummets into the Christian Hell, and does what Godzilla does best -only in the underworld rather than Tokyo. James Stokoe's art is absolutely beautiful, and he captures Godzilla's likeness perfectly.

There's no dialogue - after all, the protagonist is a giant monster - but there is an intriguing story told panel by panel. Is there enough story here? It's true that without any dialogue or narration this is a very quick read, and at US$3.99 an issue might represent poor value to some readers. Not to me, though: the art and layout really is that good, and the premise is just so ridiculous - yet treated so seriously - that it's difficult not to be a little bit impressed. (4/5)

Dinah Lance continues to travel across American on tour with her band - but at the same time she's defending Ditto from the unknown assailants who are hunting her down, and training her bandmates to help out. I'm still really liking this comic, which feels quite distinctive among DC's usual range of superhero titles. Part of that is down to the premise: indie rock queen joins band while fighting crime. Another part is down to Annie Wu's artwork, which feels a lot more like an independent book than something from a major superhero imprint. We're only two issues in, but this looks like another great book from DC's growing range of great books. That's good to see. (4/5)

Another miniseries from Valiant: it's nice to see at least one superhero publisher keeping the miniseries format going, since it can generate a lot of great self-contained storylines. In this one Gilad, the Eternal Warrior, has pledged to defend a super-powered girl who foretells the end of the world - and the super-team Unity is dispatched to take her from him. There's a nice sense of foreboding and scale here: it really does feel as if it might be close to the end of the world. Despite a wide range of characters and back story it's easy to follow and very entertaining. Gill and Braithwaite's artwork is excellent as well. (4/5)

Book of Death: Legends of the Geomancer #1

This book is only available in print, and only as a retailer incentive: basically if a store buys enough copies of Book of Death they can also order this spin-off anthology comic. It's not available digitally, and Valiant claim it's not ever going to be collected in trade. I'm not sure how I feel about that. It's their book to distribute how they see fit, but there's something rather off about making a comic book such a weirdly exclusive item. It's not sitting well with me, and I hope it's not the start of a trend. The book provides background information on the Geomancers, who are a critical part of the Book of Death miniseries. And the weird thing is, this comic is really very good. The art is sensational, and its story of a shaman being taken to a hill to be sacrificed is well paced and has strong characters. Why hide it like this? Why not give it the best shot possible at finding its audience? (4/5)

It's time for the end of year formal ball. I'm not sure if this is an American thing; I studied at one Australian university and now work at another, and I don't recall ever seeing a formal ball of this nature. It's all an excuse to bring the three protagonists' troubled love lives to a head. Susan and McGraw hook up again at last. Esther struggles to work out if she's interested in girls or boys. Daisy remains oblivious to her most ardent suitor. It's all very light, inconsequential stuff as far as comic books go, but that's what makes it such an entertaining read. The dialogue is great, Lissa Tremain's artwork is wonderful, and even when the jokes are corny they're corny in a very charming and knowing way. This is a great comic. (5/5)
Posted by Grant at 7:58 AM