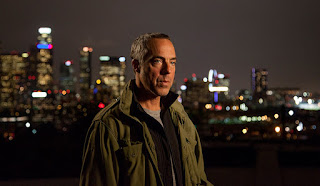 Police detective Harry Bosch (Titus Welliver) is supposed to be sitting at home waiting for the verdict in a civil lawsuit laid against him for shooting a murder suspect. Instead he's up in the Los Angeles hills investigating a grisly discovery: a child's skeleton.

The police drama is a very crowded marketplace in television. It's been one of the most popular genres for TV drama for about 60 years. Bosch's production arrangement - it's been produced directly for Amazon in the USA - may be reasonably new, but its heritage is very, very old. Titus Welliver plays Bosch: a weary loner working the streets of Los Angeles. He's a maverick, prone to rushing off and investigating things on his own rather than playing by the book. He's constantly circumventing authority in an attempt to crack his latest case. He's troubled by his own personal traumas: a murdered mother, a childhood of abuse, and several years' experience as an army ranger in the Iraq and Afghanistan wars. This is to an extent less of a TV pilot and more of an extended series of stereotypes and clichés.

And yet to a certain degree it all works.

The key is integrity. This pilot is not attempting to break the rules or change genre conventions. It's giving its audience something readily recognisable, and it does it with a minimum of pretence. Viewers who want this sort of thing will likely lap it up. Viewers who don't? Well it's a fair argument to take that Bosch isn't for them.

The episode's best element is Titus Welliver in the lead role. He's one of those actors who's been a perennial face in TV and film for some years, yet never seems to have been given the opportunity to headline his own project. His starring role here actually feels a little overdue. He does a fantastic job, giving Harry Bosch a lot of depth purely through the way he pauses, or glances, or thinks. Given the fairly by-the-numbers storyline and set-up, a strong central performance will be key to the series ongoing success. The supporting cast acquit themselves well, although with three former ER actors in the cast (Amy Aquino, Troy Evans, and Abraham Benrubi) I do wonder if there's either a fan or an old colleague in the production team. Alan Rosenberg is particularly appealing as William Golliher, a laconic doctor doing forensic work for the LAPD.

There was one surprise at the end of the episode - from the set-up I had assumed Bosch would be a series of self-contained episodes like most other police procedurals. Instead it ends mid-story, with open threads flailing all over the place. It's a clever gambit: I would have been happy to pass the series by and catch up with it some time in the future. Now I want to tune into the next episode and find out what happens.

Bosch is available in Australia at SBS On Demand. In the USA it's available via Amazon. For other countries I'm afraid you're going to have to look for it yourself.
Posted by Grant at 9:14 AM